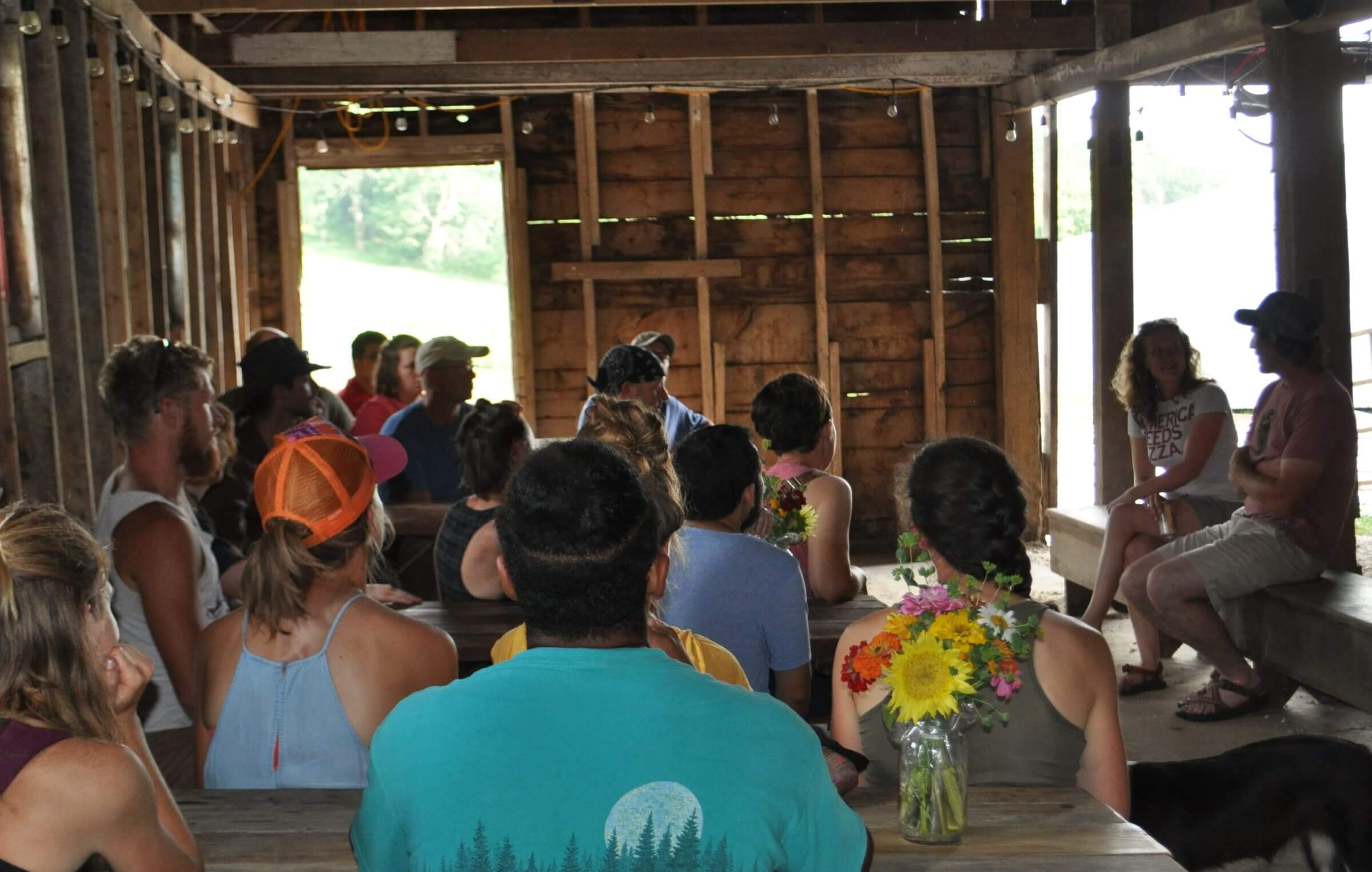 Maren and Tom kick off the NIFF gathering by sharing the background of Luna Valley Farm, and the group beat the heat by staying in the shade of the barn.

Thirty farmers gathered at Luna Valley Farm for this month’s Northeast Iowa Food and Farm Network, where they learned from Maren and Tom Beard about their farm operations and diverse, value-added enterprises. Even the oppressive heat wave didn’t deter attendees, who came from as far as Solon, Lamont, Tripoli, and Brownsville.

Maren and Tom shared their farm history in the shade of the barn before taking the group on a walking tour. The Beards purchased the land from Ronnie and Rosie Rasmussen in 2013 and were married on the farm in 2015.

When they bought the farm, Tom and Maren didn’t envision the innovative enterprises they would eventually add. Instead, those plans gradually grew out of their passions for cooking good food and building community. Those passions have nurtured diverse agricultural enterprises on their farm, and also created new markets that shorten the gap between farmer and consumer. Adding diversity has enabled Maren to join Tom full-time at Luna Valley.

The tour started in a field of spring wheat. The Beards typically plant certified organic corn, soybeans, small grains, and hay in rotation, which is fed to livestock or sold as a commodity. But this wheat crop has a special destination- Pulpit Rock Brewing! Pulpit wanted to make a place-based beer, and Tom and Maren were excited to collaborate. They will harvest the crop in mid-August, windrowing and combining it, and doing extra cleaning so it’s ready to brew. The special beer will be ready in 2020.

Just a short walk down the hill on the opposite side of a small valley, the tour stopped at two wall-tents on platforms nestled in a burr oak grove. The picturesque site is home to their glamping (or glamorous camping) enterprise, which they started in 2018. Since then, they’ve had many repeat guests, with some coming from as far as San Francisco. 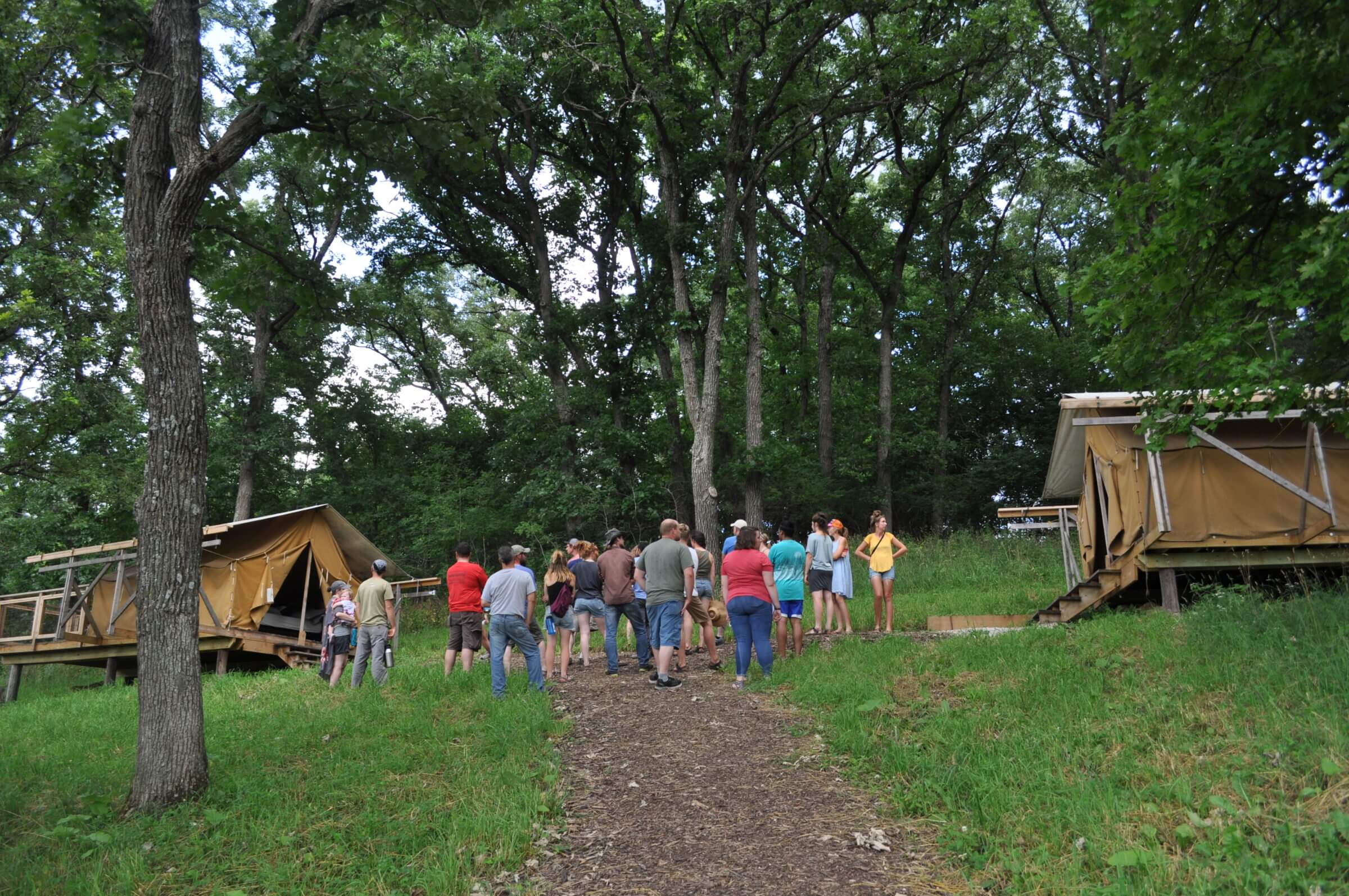 Attendees check out the luxurious glamping tents under the shade of towering oaks at Luna Valley.

Each wall tent is decked out with a king-sized bed, dressers and lamps, and a private deck. The luxurious shower and bathrooms are a five-minute walk away in the barn. The Beards use AirBnB as well as their own website to promote the experience, and have learned that it works well, especially if you’re explicit about what guests should expect. “We let people know that this is a working farm, and they might wake to sheep bleating in the middle of the night,” Maren said.

The sheep were bleating on the other side of the grove, and the group headed over to learn about the Beards’ livestock production and marketing. With a herd of 140 ewes, they usually average 210 lambs each year and market 60 lambs directly to meat customers and wholesale accounts like the Oneota Coop, La Rana, and Rubaiyat. The sheep are moved to new pasture every day, and each pasture gets about 45 days of regrowth before the sheep return.

Tom and Maren also have herd of cattle, and direct market grass fed & finished beef. On the way back to the farm the group caught a glimpse of their 18 feeder pigs. Not only will the pork be used for the pizza enterprise, but the pigs also eat scraps from kitchen prep like beet peels and basil stems. 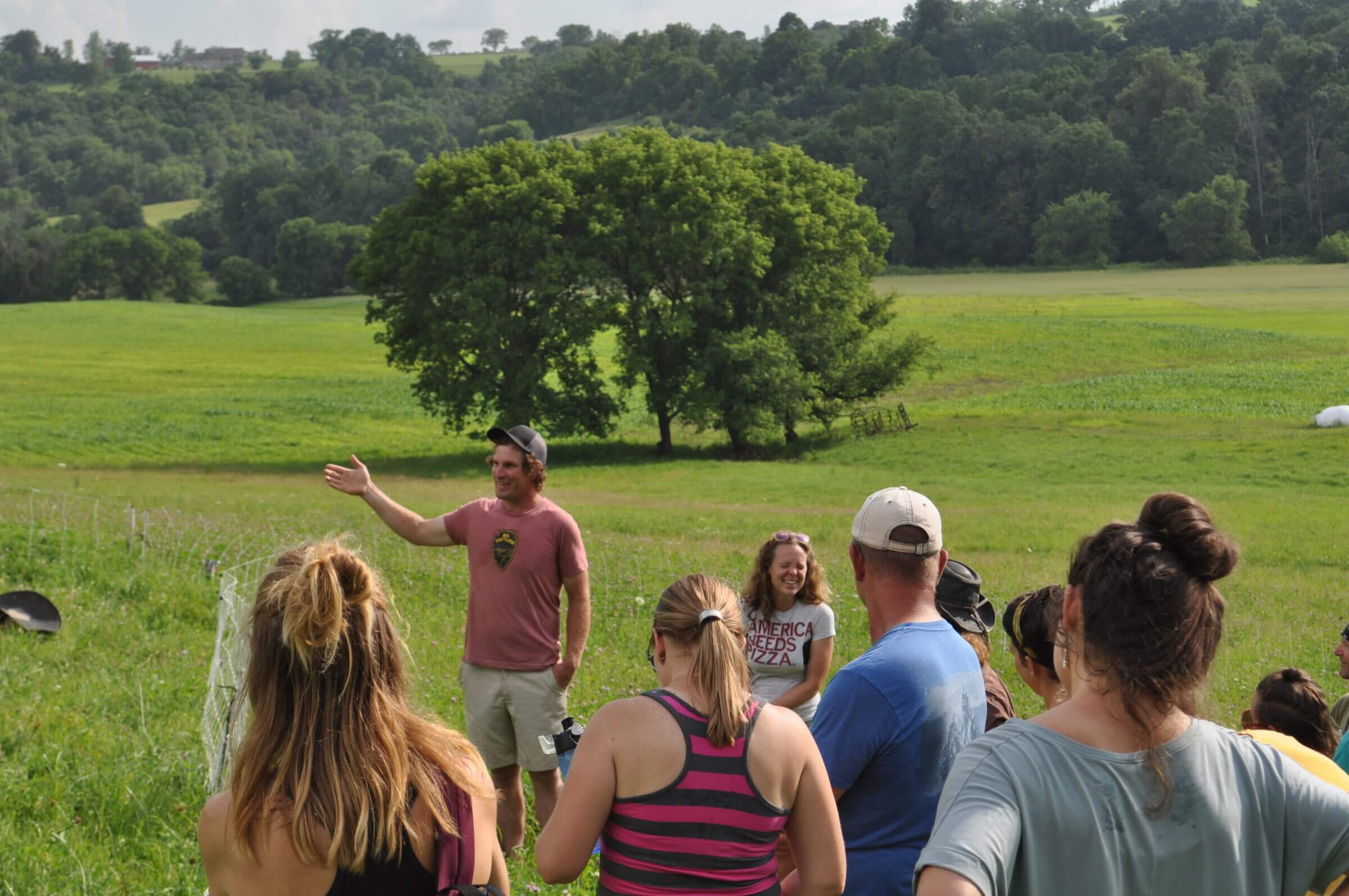 Tom and Maren show fellow farmers their sheep herd, and shared a laugh about Tom’s tendency to set up sheep fence after dark.

The final stop in the air-conditioned pizza kitchen was a welcome respite from the heat, and the group had many questions about this unique enterprise. Maren and Tom explained that in 2016, they had visited other Midwest pizza farms for fun. It was on one of those return trips that they realized it would be a good fit for their farm. “We tend to decide something and go for it,” Maren said.

The Beards put together a business plan in ten days and submitted it to the Winneshiek County Business Booster Challenge, where they received $4,000. They financed their plan from multiple sources, including family gifts and loans, a Kickstarter campaign, and a traditional bank loan. All in all, it cost them $130,000 in construction and equipment to start the pizza enterprise. Seeing community participation in the start-up, including 250 Kickstarter contributions, bolstered the Beards. “We felt an outpouring of support from the community,” Maren said, “and that helped us feel confident to move forward.”

The Beards renovated the former milking barn, turning 13 milking stanchions into a certified kitchen. They poured concrete, reinforced the structure, and framed up new walls. They added a lean-to for the wood-fired oven that they purchased specially to cook Neapolitan-style pizza. And, Maren and Tom and some close friends attended a class to learn how to make and hand-stretch the dough for the specialized oven. 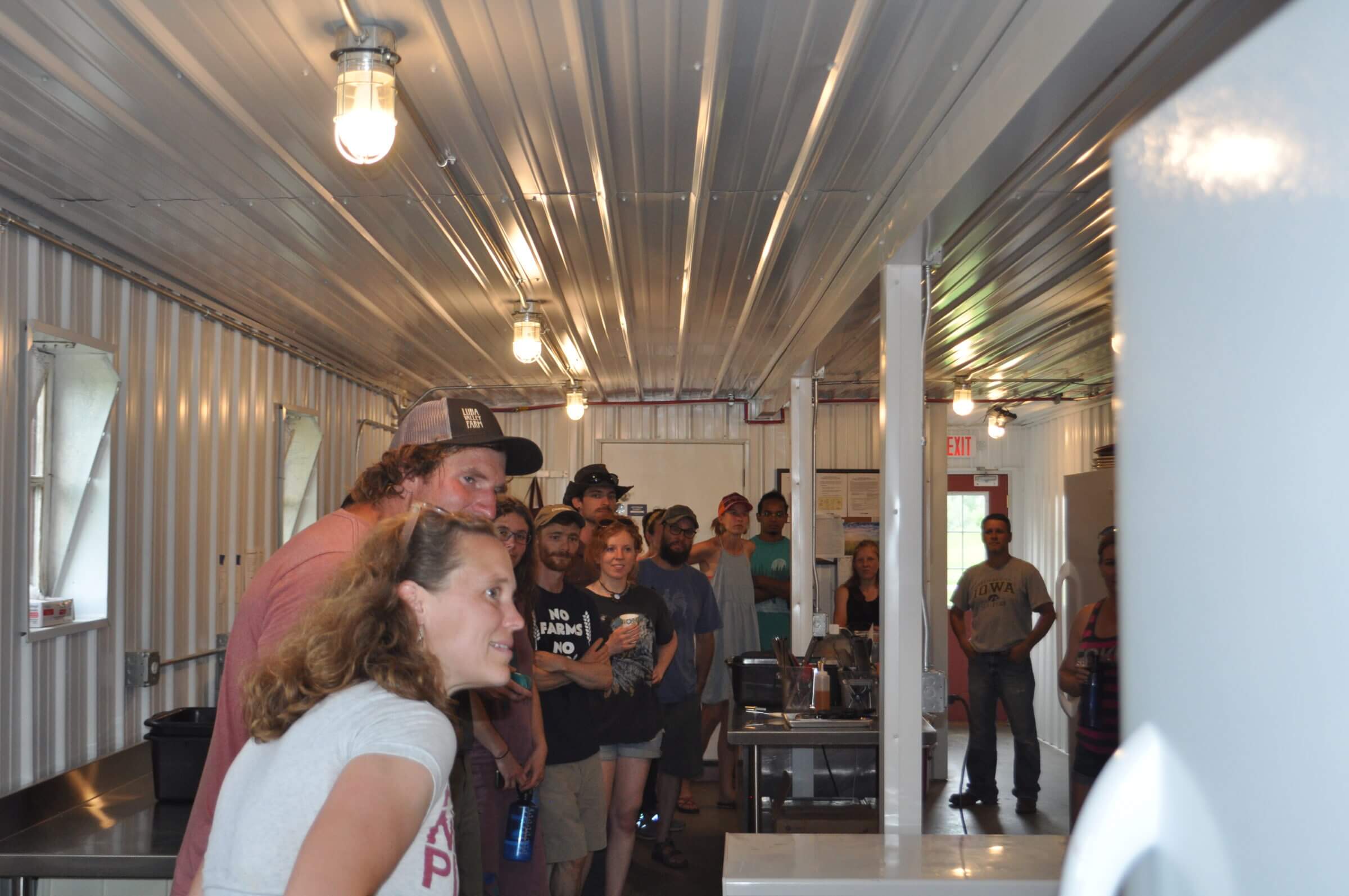 The group toured the renovated pizza kitchen and checked out specialized equipment in the space where been milking stanchions formerly stood.

Nine months after deciding to start a pizza farm, the Beards were in business. Now Luna Valley is open every Friday night from 4-8 p.m. for pizza. Six people work with the Beards on pizza nights, with two hand-stretching the dough, two topping pizzas, Tom at the pizza oven, and Maren and two other employees taking orders and helping customers.

Their pizzas feature what’s in season, including ingredients from Luna Valley as well as other local farms. Maren generates ideas for their menu, which changes each week. When their cabbage was ready for harvest, “Humble Pie,” a roasted cabbage and kielbasa pizza premiered on the menu, and was a big hit! Maren and Tom are outpacing the number of pizzas they predicted in their business plan, hitting a record 200 in one night this summer, and drawing locals as well as folks who drive 6 hours for pizza. They have also hosted private events.

“Would you do it again?” Bonnie Haugen wondered. The answer was a resounding “Yes.” “I’m not sure what my dream was but I think I’m living it!” Maren said. The crowd was amazed by how Tom and Maren have turned their farm and food passions into a successful, diverse business. “Do you have a culinary background?” asked Derick Perkins of Lamont. “Nope,” Tom replied, “We just like to eat.” 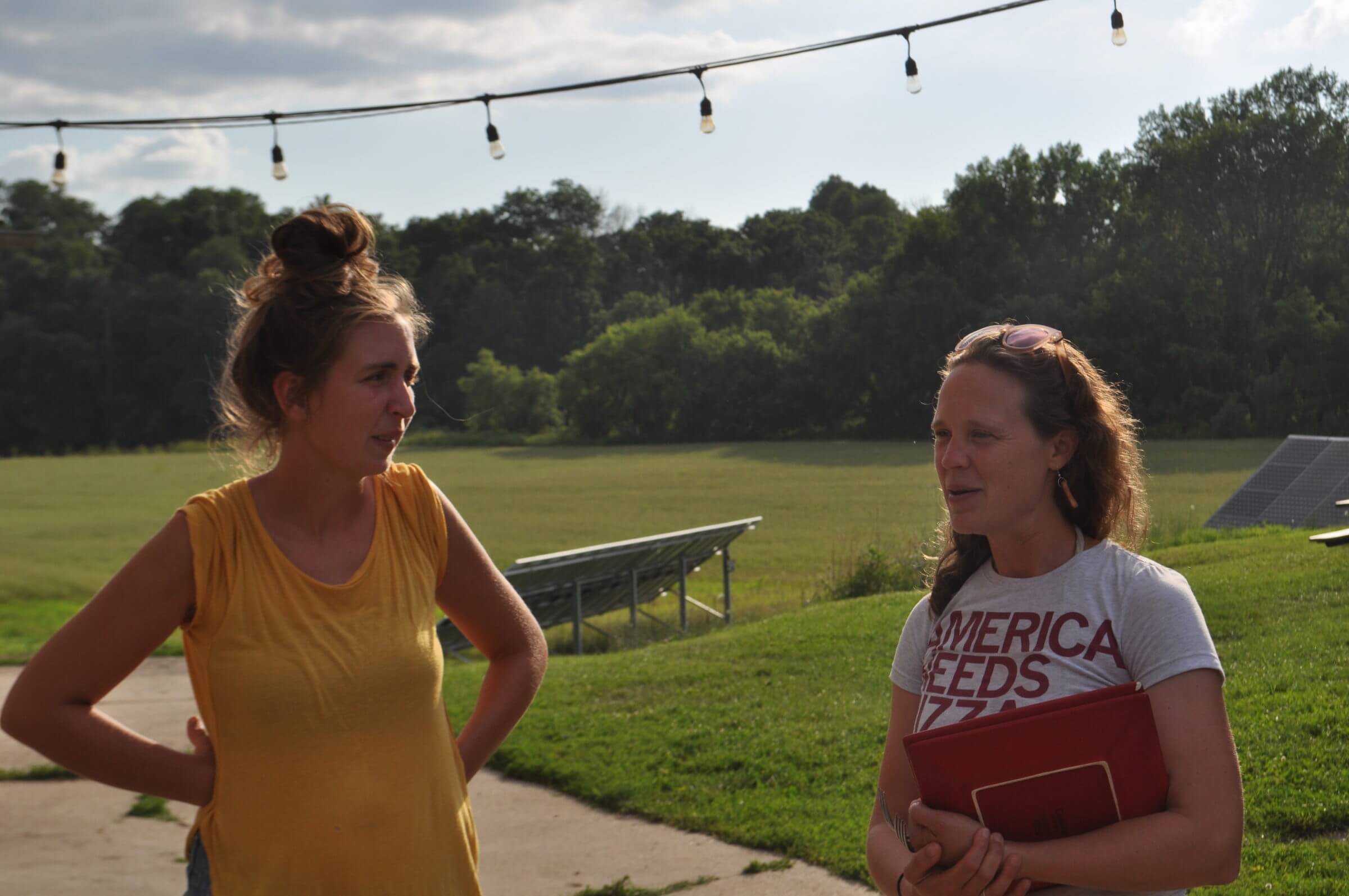 Carmen Black asks Maren Beard specifics about the barn renovation project, since she’d like to reinforce her barn at Sundog Farm in Solon. Networking is a key component of the Northeast Iowa Food and Farm Network, where farmers build relationships and learn from each other.