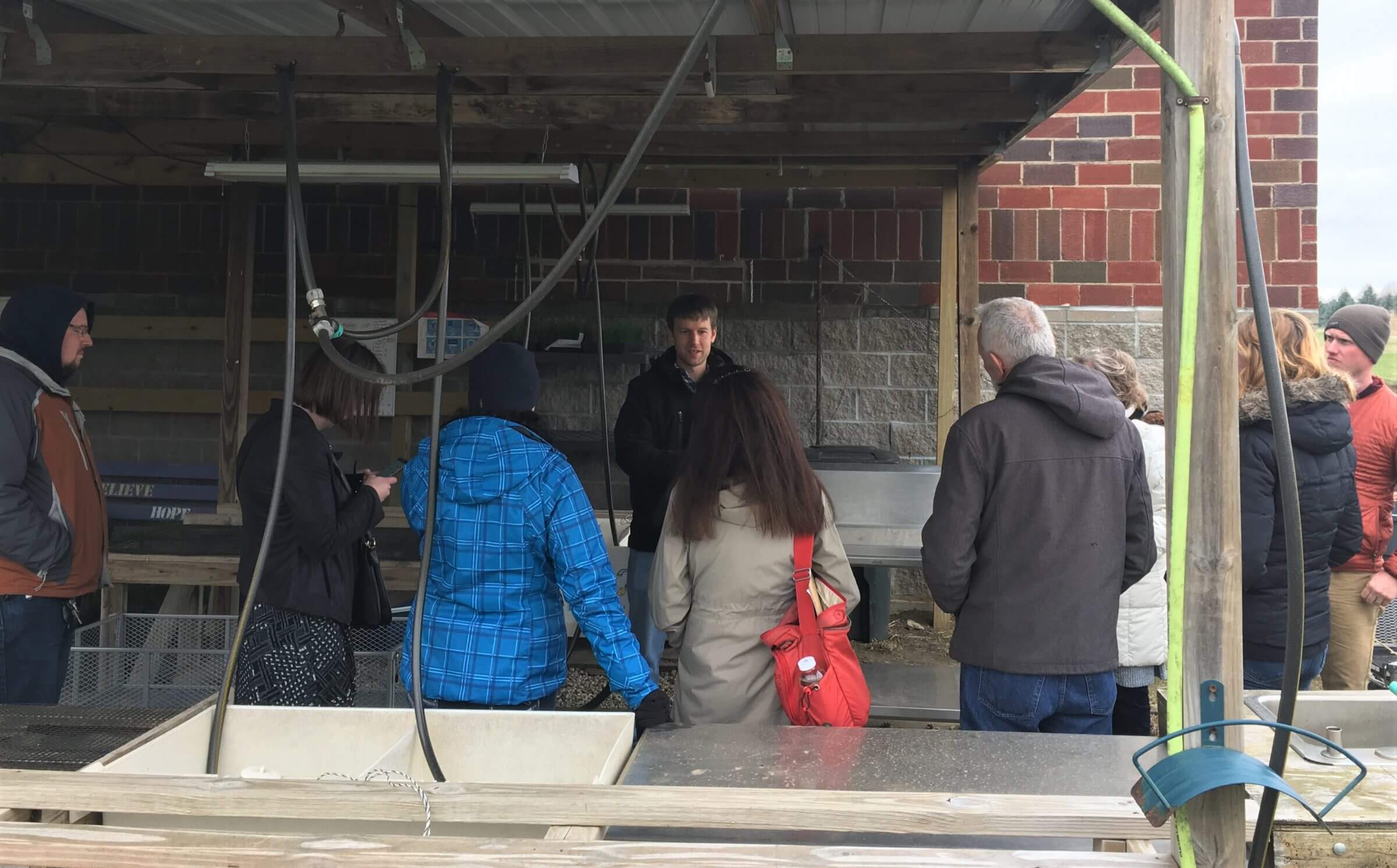 Iowa’s local food hubs are a tight-knit group that learns from each other and works together to strengthen the local foods economy, meeting regularly as part of the Food Hub Managers Working Group (FHMWG). Yet, Iowa’s food hubs are a study in diversity; they cover distinct geographic regions, operate across a spectrum of different business models, and serve unique communities. Nowhere is this more evident than at Global Greens in Des Moines.

Global Greens (a program of Lutheran Services in Iowa, or LSI) is exceptionally distinctive for the farming community it empowers: refugee farmers. Daniel Bowser, Food Hub and Garden Specialist at Global Greens, hosted the most recent FHMWG gathering and shared the story of the hub and a tour of the incubator farm with fellow food hub managers.

How it all began

In 2010, a group of refugees including Firmin Ntakimazi traveled with Nicholas Wuertz, the Director of Refugee Community Services at LSI, to Washington DC. As the group traveled through rural Iowa, the refugees saw the scale of Iowa agriculture and the quality of Iowa’s land base for the first time, and they got excited. Many had been farmers in their home countries and were now realizing that they could pursue their passion here. Thus, Firmin and others began asking LSI to start an agriculture program. LSI took the first steps, doing research and finding that refugees wanted to farm for a number of reasons:

As a result, LSI started a community garden program in 2010 and connected over 100 families to gardens that year. (The community garden program is still around and connects around 250 families to garden plots in the metro each year). As they reached the limits of what they could grow in small garden plots, refugee farmers continued to ask for more land and business opportunities. So, in 2013 LSI established an incubator farm where they have access to farmland and shared infrastructure.

At the incubator farm, farmers access up to a quarter of an acre, build capital, and experience farming in Iowa. Twenty-four families take part, and four graduates are now renting space around Des Moines. Many of the refugees come from the countries of Liberia, Congo, and Burundi in Africa as well as from Bhutan and Myanmar (or Burma) in Southeast Asia. 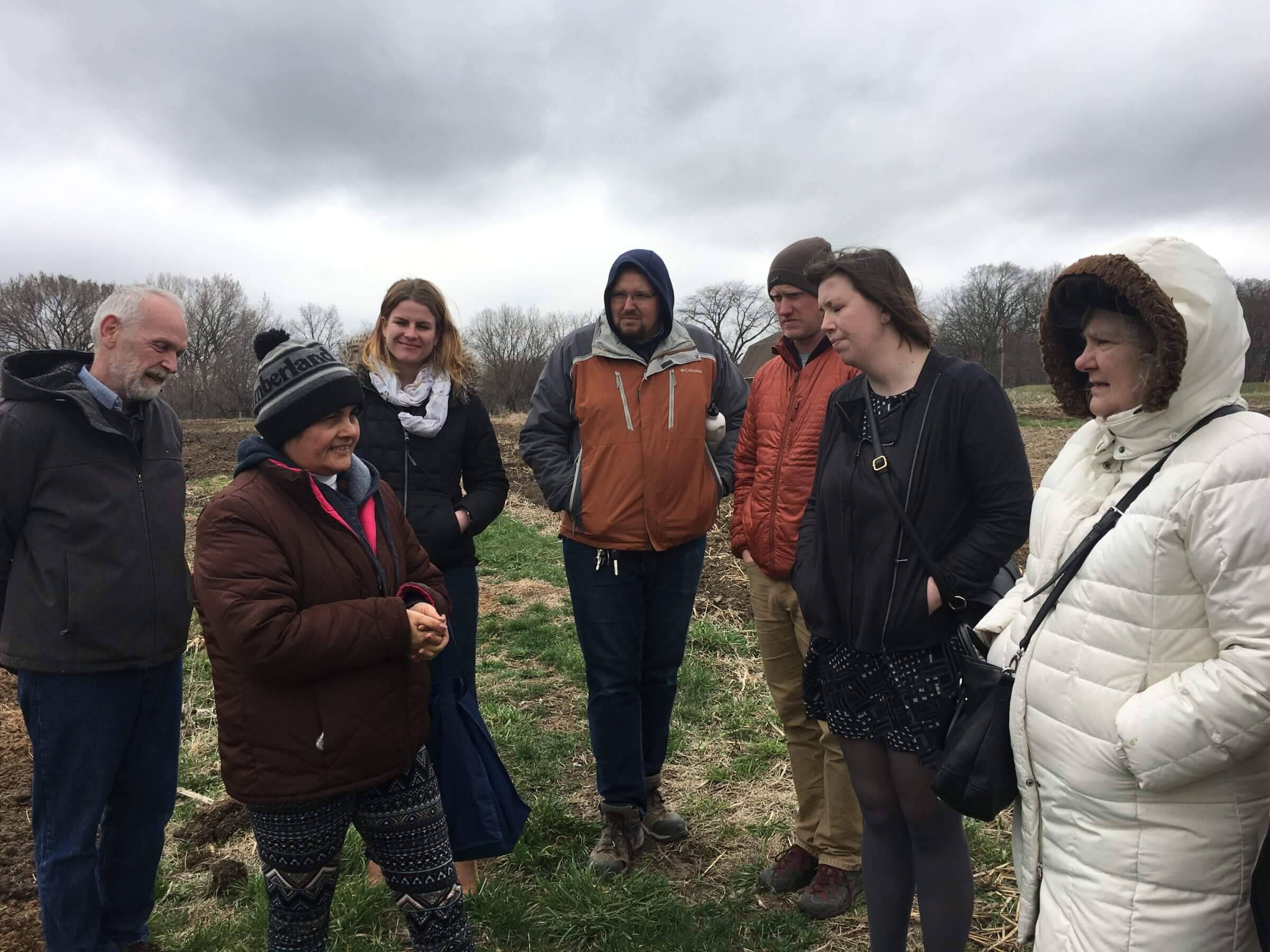 Tika Bhandari, front left, shares her experiences with the group. Tika came to the U.S. as a refugee from Bhutan, migrating with her family in 2009 when she was 32 years old. When LSI’s agriculture program started, her father was excited that they could grow important cultural foods such as bitter gourd, daikon radishes and mustard greens. Now a graduate of the program, Tika has established a larger plot and grows many vegetables for sale. She has also experimented with growing ginger, and in the future she’d like to develop a greenhouse growing system to cultivate larger quantities. Not only is Tika a successful farmer, she also fills many roles as an employee at LSI where she both teaches English and translates for other farmers in the Global Greens program.

Farmers settled at the incubator farm and began to grow an abundance of produce, and they returned to LSI staff once again. This time they were looking for ways to develop a market for their products. Thus in 2016, at the behest of the farmers, LSI started a food hub in addition to a refugee farmers market.

Here’s where the business model comes in: LSI’s food hub is an aggregated CSA model (CSA stands for Community Supported Agriculture). In a CSA, each customer buys a seasonal share of produce from a farmer at the beginning of the growing season and then receives weekly allotment of vegetables. An aggregated CSA works similarly for the customer, but the produce in the box comes from multiple farms. By aggregating from many farmers, Global Greens can support refugee farmers who are growing and selling at a very small scale.

Not only does the aggregated CSA model provide a market to small-scale farmers, but Global Greens addresses the specific barriers experienced by refugees. Even the top English language speakers in the program are faced with cultural, language, and technological barriers that make sales more difficult. Global Greens provides translators, infrastructure, and a clear system for selling produce, giving refugee farmers ready access to a market.

Global Greens CSA has grown since its inception in 2016. That year they had 18 full share equivalents (some smaller households purchase half shares). In 2017 they more than doubled to 47 full shares, and in 2018 they grew significantly again, providing 92.5 shares of produce. Their goal this season is to produce and sell 120 shares.

Coordinating with so many households, and farmers, to produce a variety of food in abundance throughout the growing season is a complicated logistical task! Daniel starts coordinating with farmers over the late fall and early winter. In December, staff determine the crops to be grown for the season and pricing. Farmers fill out forms sharing what they’d like to grow. Then the hub staff figures out a comprehensive crop plan, and assigns each farmer an individual crop plan with dates of harvest.

“You are not going to stop them from farming.”

Throughout the season, the biggest difficulty is communication. Dan uses a whiteboard with magnetized images of crops to help ensure that farmers are bringing the right produce each week. Farmers can also use the magnets to let him know if they can’t provide what’s in the plan.

Since the farmers grow vegetables from their own food cultures, the CSA share usually sports one ‘weird’ vegetable per week -i.e. something not typically part of Midwest cuisine. That keeps the share interesting, and helps connect shareholders to the culture of the farmers they support. Global Greens provides recipes to help shareholders use the produce. They also survey the shareholder to continuously improve their offerings and services.

Refugees catalyzed LSI’s agriculture support program, and they have continued to propel it at each stage of development. Dan speaks of the incredible passion refugees have for agriculture. No matter the difficulties, he says they will find a way to continue their cultural practices, “You are not going to stop them from farming.”