The after-school cooking club at Wings Park Elementary in Oelwein had a very busy year learning recipes and making healthy snacks and meals.

Students in grades 2-5 would gather once a month for a cooking activity led by FoodCorps member Alesha Roll. The recipes were hands-on and somewhat adventurous for a few members.

There was one requirement on the day they made personal pizzas – students had to put at least three veggies on their pizzas to practice trying new foods. 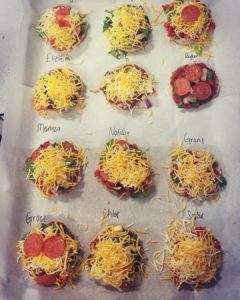 One student said that he had never had veggies on pizza, and he was scared to try it. When he decided to be brave and try it, he was so surprised. He proclaimed to the entire class that veggies made pizza so much better!

Cooking club concluded each session with yoga or another type of physical activity at the end of class.

Here are the foods, recipes and techniques explored this year. Locally-sourced foods were used as much as possible.