For the first time in over a decade, local families can enjoy ice skating on the Marquette bench.

Just before the new year, the city’s public works employees, Jason Sullivan and John Hines, created the ice rink on the basketball court at the city park. Over 125 sand bags were filled and placed around the court’s perimeter, holding down a large sheet of plastic, which was then covered in water. Cold temperatures helped solidify the ice. 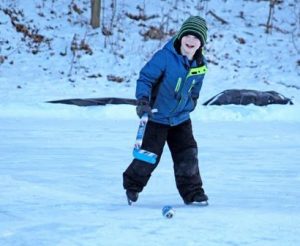 “We are very appreciative of Jason’s and John’s efforts. They deserve all the credit,” said bench resident Alicia Mullarkey, who spearheaded the effort to create the ice rink again. ”All I had to do was mention it, and they went to work to make it happen.”

After her family moved to the bench two years ago, Mullarkey said she’s often heard from people who have fond memories of ice skating and playing hockey there or at the pond by the city shop. She, too, has fond memories on the ice, after growing up skating on farm ponds each winter with her uncles and grandpa.

“There are quite a few kids in the community, so it just made sense to try and get it going again,” she said. “When I mentioned the possibility to folks, everyone provided positive feedback.”

Despite the frigid temperatures, Mullarkey said she and her family have already completed several trial runs on the ice. Six-year-old Owen attempted skating for the first time, and loves it, she remarked. Although 3-year-old Henry hasn’t tried out skates yet, he’s enjoyed sledding on the slick surface.

With warmer weather, she hopes other kids will find the ice just as nice.

“What I love about the location is that kids from the neighborhood can just venture over after school or on the weekends. People from surrounding areas can also utilize it,” Mullarkey said. “It’s one more thing kids and families can do outside together during the winter months. It can be a shared experience among generations.”

Now that the rink has been created for this season, Mullarkey said she’d like to involve the community in shaping next year’s product. She’s already received valuable information from fellow bench resident Don Smalley, who worked for many years to perfect the ice at the bench rink and on the pond by the city shop.

Smalley estimated 2004 was the last time he helped create the rink. “He deserves a lot of credit for many of the fond memories folks have,” Mullarkey said. “Hopefully, we can employ some of his methods to improve the quality of the ice in years to come. We’ve got a start and, hopefully, we can build from there.”