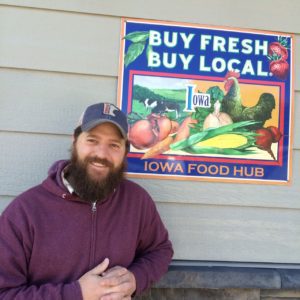 Phil Jahnke Sauer has been promoted to General Manager at the Iowa Food Hub. Phil joined IFH in 2016 as the sales and warehouse manager.

Phil has a background in grocery retail management and production, training, logistics and was an Army Reserve Officer. Phil is an avid reader, baker and cook and raises poultry and produce on a small farm outside of Lourdes, Iowa.

While at the food hub, Phil has been responsible for day to day warehouse operations, procurement and aggregation. He has also assumed the responsibilities of the hub’s food safety program and its role as sponsor of the Iowa GroupGAP Network.

Phil steps into the role previously held by Georgia Windhorst who is relocating to the Twin Cities. The food hub board of directors is currently accepting applications to fill Phil’s position – a full-time Sales and Warehouse Manager.

One thought on “New General Manager at Food Hub”