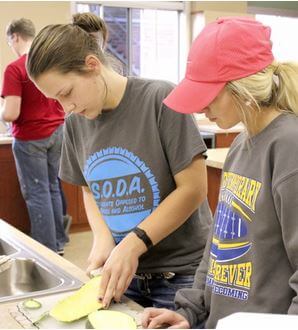 Nearly a dozen MFL MarMac students feasted on some unique food combinations during the school’s first FEEST dinner of the year Oct. 28.

The movement came to Northeast Iowa in 2009, when two area students—one from North Fayette Valley and another from Postville—attended a youth conference and heard students from Seattle speak about FEEST. They liked the concept and wanted to incorporate it into their schools. Since then, other schools in the area have also launched their own FEESTs, with the help of Iowa State University Extension and Outreach.

As the FEEST intern, Weigand plans the FEESTs—the date, theme and foods that will be used. “I have to stay on a budget,” explained Weigand, who noted she has $200 to spend for all four FEESTs. “I buy local to keep the costs down.”

Weigand is aided by Katie Ruff, the owner of By the Spoonful in McGregor, who helps Weigand with planning and selecting foods to use for the FEEST dinner. Ruff also shares her expertise with the FEEST participants, demonstrating proper knife and utensil usage and suggesting ways to combine and cook foods.

Ruff, a graduate of MFL MarMac, said she’s sought ways to get involved with the school since opening By the Spoonful over three years ago. Since FEEST is associated with 4-H, which she participated in as a kid, and the Iowa State Extension office, where she interned while in college, it was a no-brainer, she said.

“I like helping the kids and teaching them new things,” she said, “and I like to experiment in the kitchen. So this is right up my alley.” Experimentation is one of the key aspects of FEEST.

“The idea is to come up with other ways to use food,” explained CiCi Mueller, FEEST coordinator for the Northeast Iowa Food and Fitness Initiative and the FEEST food coach at Postville.

Here’s how it works: A variety of foods, from all the food groups, are laid out in front of FEEST participants. They’re challenged to plan four separate dishes utilizing those ingredients. Two students worked together to create each dish.

Pork tenderloin was the focal point of one of the dishes. It was combined with sweet potatoes and onions, then placed atop a bed of bulgur, a whole wheat grain that has a nutty flavor and the consistency of rice. The group tasked with creating that dish also made a side dish featuring French rolls covered with white cheese.

Another dish included wheat bread topped with chunks of acorn squash and apples. One was a fruit slaw featuring mango, pomegranate and apples, while the final dish was a mix of zucchini, mushrooms, greens and bulgur.

The combinations were unlikely, but that’s the point, Weigand said. “The point is to teach people how to cook without a recipe, to use trial and error to learn what goes together and what doesn’t,” she noted. “It teaches new culinary techniques.”

Weigand said she hopes FEEST can fill an extra-curricular niche the school doesn’t currently offer—a cooking club. “This is sort of like a cooking club,” she said. “We don’t have one, and there are a lot of people who’d like to learn how to cook.”

That’s what got participant Reagan Butikofer interested. “I like to learn new things with foods,” she remarked, “and I like to cook, but I don’t usually cook a lot at home.”

Any student is welcome to participate in FEEST. They just have to sign up when Weigand announces she plans to hold a dinner. Weigand said the next FEEST will take place the day before MFL MarMac’s Thanksgiving break begins. A theme has yet to be decided.