The sixth graders then conducted a taste test among fourth through eighth grade students. A majority said they enjoyed the sample and would like to have the sweet potato stew on the school lunch menu. 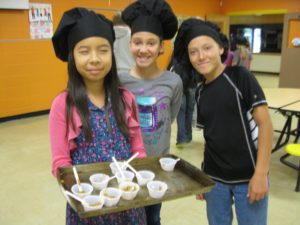 The school cooks made a similar stew and served it Oct. 3. Sixth grade Cafeteria Coaches visited with K-2 students at their lunch tables to encourage them to sample the unusual stew. They told the younger students about the ingredients and what they have learned about Africa.

Cook on HIGH for one to two hours, or on LOW for 4 hours, or until vegetables and lentils are tender.
Serve with rice—Rice has been cultivated in West Africa for more than 2,000 years.