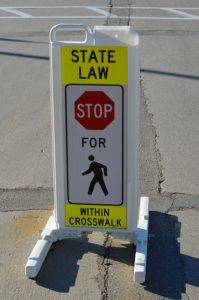 New pedestrian crosswalk signage (such as pictured at right) has recently been placed in the middle of streets in four different locations in Waukon, but in addition to creating awareness of safety for pedestrians and motorists has also created some confusion for each as well. Waukon Police Chief Phil Young advises that the new crosswalk signs have been placed to help raise more awareness of a State of Iowa law that has been in place but has not necessarily been adhered to. Section 321.327 of the Iowa Code, entitled “Pedestrians’ Right-Of-Way,” states, “Where traffic-control signals are not in place or in operation, the driver of a vehicle shall yield the right-of-way, slowing down or stopping if need be to so yield, to a pedestrian crossing the roadway within any marked crosswalk or within any unmarked crosswalk at an intersection.”
Although that law has been in place and is explained in the Iowa Driver’s Manual for driver’s license testing, Chief Young says that many motorists still don’t seem to realize they are required to stop for any pedestrian in a marked crosswalk or any pedestrian in an unmarked crosswalk at an intersection. Thus, the implementation of the new signage currently in place at locations where Chief Young said his department received the highest number of complaints about safety concerns crossing the street.

Currently there are signs at crosswalks by Gus & Tony’s on West Main Street, by Kwik Star on Spring Avenue, by the Allamakee County Courthouse on Allamakee Street and by Waukon State Bank on Main Street. Young says additional signs may be added, but reminds that the law applies to all crosswalks, with or without signage.

While being placed with the proper intentions, the signs have also apparently caused some confusion for drivers first experiencing them, as the bright red STOP sign on the crosswalk signs apparently has drivers thinking they must actually stop at these signs like a regular stop sign, whether there is a pedestrian in the area or not – a reaction that has nearly caused some vehicle rear-end collisions. Chief Young reminds drivers that they only have to stop at these new crosswalk signs when pedestrians are in the crosswalk, as indicated by reading the entire sign.

Young also reminds pedestrians that motorists are only required to stop at crosswalks when a pedestrian is crossing or waiting to cross, and that they need to actually step off the curb into the crosswalk to make their intention clear to motorists. “There should be plenty of room for pedestrians to safely step off the sidewalk and into the actual walkway painted on the street in order to make their intention to cross known,” Young said. However, pedestrians also need to be observant and not assume a vehicle will stop just because they are in the crosswalk. Police Chief Young says if a vehicle drives through a crosswalk when pedestrians are crossing or waiting to cross, the license plate should be written down and turned into the Waukon Police Department, as this is a punishable offense in addition to being a public safety issue. Young also says that the Iowa law only applies to marked crosswalks or street intersections, not to pedestrians trying to cross in the middle of an unmarked street. “If you’re trying to dart out between two parked cars and aren’t in a marked crosswalk or street intersection, the law does not apply,” he said.