Chicken, quinoa, onion, garlic and gouda cheese. An interesting combination for a food dish, albeit a surprisingly tasty one. It was one of several dishes created by MFL MarMac’s youth wellness team, HYPE, for its first FEEST dinner last week.

The movement came to Northeast Iowa in 2009 when two area students—one from North Fayette Valley and another from Postville—attended a youth conference and heard students from Seattle speak about FEEST. They liked the concept and wanted to incorporate it in their schools, explained CiCi Mueller, FEEST coordinator for the Northeast Iowa Food and Fitness Initiative and the FEEST food coach at Postville.

MFL MarMac joins Postville, Central and Decorah in participating in FEEST this school year, she said.

The goal in establishing a 4-H FEEST program at MFL MarMac, said McGregor Center nurse Jennelle Schroeder, who also advises HYPE and serves as the FEEST food coach, is to allow HYPE members to educate themselves, as well as others in the community, about the importance of incorporating locally-grown, nutritious foods into everyone’s daily lives.

“FEEST teaches us all that this is the best fuel for our bodies, educates youth about where our food comes from and how to grow and prepare it for ourselves, and provides an opportunity for making connections through sitting down to a meal with others that’s healthy and healing,” she explained.

FEEST is a different concept than a cooking club, Mueller said. “They’re learning to cook nutritiously and try new foods,” she added. “We’re inventing and creating new flavors and dishes.” 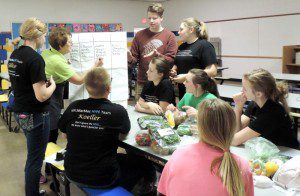 On Tuesday last week, HYPE members went grocery shopping in Decorah, at the Oneota Food Co-op and Fareway store, selecting items from each food group. On Thursday, they split the foods up into four categories and were challenged to make four dishes using those ingredients.

The combinations were unique, but the kids were encouraged not to use words like “yuck” or “ew.” Aside from the chicken dish, another consisted of romanesco broccoli, rainbow carrots, spinach and chai cheese, while one featured beef roast, lemon, arugula, kumquats, gouda cheese and bread. The final dish included kiwi, strawberries, plums, bread, quinoa and mache (a green, leafy vegetable).

“I equate it to Chopped,” said Schroeder of the popular reality show on the Food Network that has competitors create dishes using all of the (somewhat unlikely) ingredients the show provides for them. “There are no recipes.” 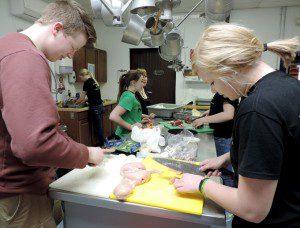 Students have to think on their feet and use their resources. “They’re not only learning cooking skills, but they’re being creative,” Mueller said, adding that being part of FEEST has also encouraged her to experiment more with foods.

“I’m proud of how creative they are,” Schroeder said following the FEEST dinner, which the HYPE students served for members of the MFL MarMac Wellness Integration Alliance.

The students also sampled their own cuisine, admitting their dishes turned out better than anticipated. However, they didn’t think they’d be able to make the meal exactly the same way again.