She credits the increase in enrollment and the community’s support for Kessel’s milestone anniversary and the culmination of the natural playground project. 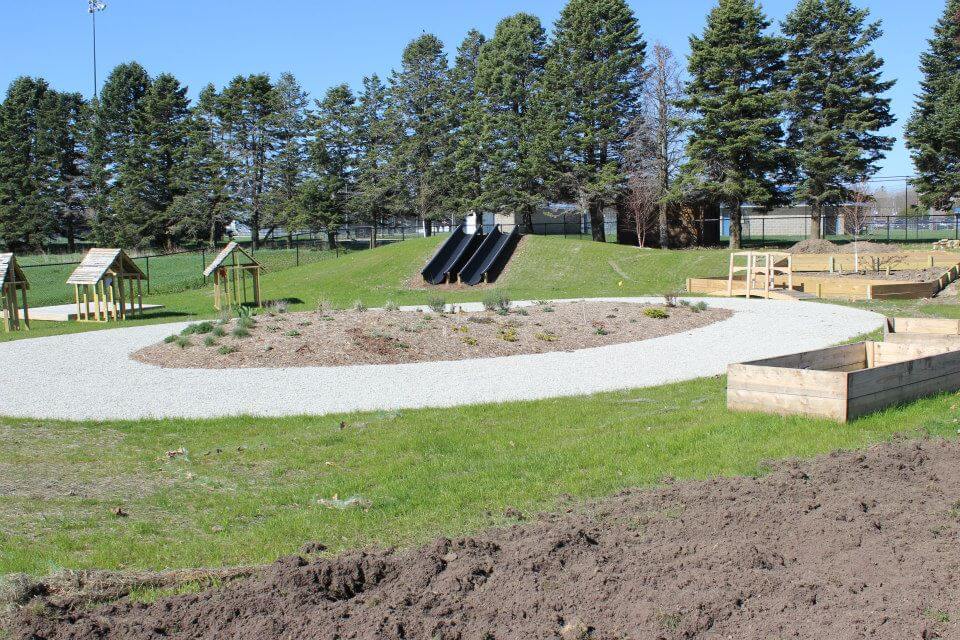 “Our old building was only licensed for 58 children, but we’re licensed for 137-139 children today. We haven’t just sustained our enrollment, but we’ve grown so much. This playground project came out of that. Our (success) is all about quality and the number of kids we’ve been able to accommodate,” she said.

In addition to Kessel, the building houses Howard-Winneshiek Preschool, Head Start, and an office for Helping Services.

“Our relationships are so close and we communicate so well together we’ve been able to do some great things,” she said.

Vobr continued, “Without the support of the community, we wouldn’t be where we are right now. We’re happy with the progress we’ve made and for the people who have helped us along the way.”

Vobr said the genesis of the natural playground project took place at a meeting a few years ago.

“Now, people are so focused on technology, but we wanted to go back to the roots of play. When we (adults) were growing up, we used to go outside run around the grass without our shoes. At Kessel, we wanted to get back to the simple things in life.”

Vobr said children at Kessel utilize the natural playground by interacting with their surroundings and incorporating imaginative play.

“Children use their surroundings to play, the flowers and plants. Right now, we’re working on growing milkweed to attract monarch butterflies. There is a path for kids to ride their bicycles, and a sandbox.”

She said numerous community members helped make the natural playground a reality. “We’ve had so many people who have helped in so many different ways, whether through donations or hands-on work. It’s been great.”

She also credits Kessel’s founding members for envisioning a child care center and making it a reality 25 years ago. In particular, she notes Helen Perkins, a long-time board member.

“Helen Perkins served on the board for many years, and helped get everything started. We like to keep her in our thoughts here at Kessel,” Vobr said.

A committee comprised of community members, community organizations, school, Kessel Kids employees, Kessel Kids board members and families was formed, and funds were raised through grants, donations and fund-raising events. With the assistance of Pinter’s Landscaping, Phase 1 of the project was completed in the fall of 2014. Phase One included a walking path, perennial garden, hill and slides. An Eagle Scout donated his time and skills to create a stage for the playground, where children could play, as well as a meeting space for classrooms group and a water table. The fence was also installed.

During the spring and summer of 2015, Phase Two of the project was completed.  This aspect of the project included sand boxes, pretend play houses, activity panels, a bridge, raised garden beds.  A local Boy Scout troop planted vegetables in the raised garden beds and built bird houses. The woodland garden and butterfly garden were also planted. The Howard County Soil and Water Conservation organization provided funding and expertise to put in a Bioswale, and it is also working to provide funding for informational kiosks to be placed by the butterfly garden and Bioswale.

Neil Shaffer provided the following information to Cresco Times Plain Dealer about the Bioswale: “As part of the Silver Creek Water Quality Project I am project coordinator for we  constructed the Bioswale as a practice to help improve the water quality leaving the property.  As water flows across the playground it exits through the area, we installed the practice,” he said.

“Rain water will flow to the Bioswale and filter through the layers of mulch and sand catching any sediment or impurities leaving the playground. As it filters through the layers it will reach drainage tile on the bottom layer and take the filtered water down to the storm sewer system. In addition we planted native flowers and grasses on top of the Bioswale to help utilize any excess nutrients further improving the water quality of the water exiting the property. This same practice can be utilized in many back yards in Cresco.  If the home is located in the Silver creek watershed which is pretty much anything north of Highway 9 you would also be eligible for up to 75 percent cost share to install the practice.”

Rachel Vsetecka, president of the Kessel Kids Board of Directors and Natural Playground Committee, said the natural playground idea grew out of need.

“We are always trying to improve on everything we do, looking to grow and make Kessel better, The natural playground was a part of that, and grew out of a need,” she said.

She continued, “Melissa came up with the idea of the playground. We didn’t have enough space, and growth tends to be one for the key words in what has been happening over the past five years at Kessel. We didn’t have any natural elements in our current playground; the kids weren’t exposed to any grassy areas, so that was the birth of the natural playground concept. It’s a relatively new concept; you don’t see much of it, because everyone looks to fancy playgrounds with structures and slides. With the natural playground, we decided to bring (play) back to basics.”

Vsetecka recalls the first meeting on the matter taking place in the spring of 2013. “It was a community effort, and support from the committee spearheaded the project, along with representation from the Howard-Winneshiek Community School District,  and Kessel community members.  All of these (participants) helped build a strong committee from the beginning. We applied for and received grant funding. When we asked local businesses for support, the community really came together. A lot of work went into the whole process of funding the playground,” she said.

Vsetecka  said they knew they couldn’t work with the sort of funding available in a large city, so they focused on making the natural playground project feasible for a small town.

“We got smart and strategic right out of the gate. We contacted people in the community who had particular skill sets to help us.”

“Kessel Kids Child Care & Learning Center is a private, non-profit organization that was created in 1993 to meet the expanding need for child care services for families who live and work in Howard County.

“The Howard County Child Care Association, Board of Directors, was formed to advocate for the need of quality child care services within the area. Initially, Kessel Kids Child Care and Head Start joined together to secure land from the Howard County Hospital, known today as Regional Health Services of Howard County, for the purpose of providing child care services. Both organizations shared the same facility. As the need for child care continued to grow and additional space was needed, the Howard County Child Care Association was instrumental in obtaining a Community Development Block Grant to build a larger, child-friendly center in 1997. Many businesses, organizations and individuals contributed financial support to obtain matching funds for the grant.

“In early 2005, a group of individuals from the Howard-Winneshiek Community School District and Kessel Kids Child Care formed to discuss the needs of the growing community, focusing on early childhood development. There was discussion regarding Kessel Kids and the Howard-Winneshiek School District, along with organizations such as Head Start, HAWC, and Keystone AEA, joining forces to meet the needs of the children in the area. The Early Childhood Development Committee (ECDC) was formed and applied for the Community Development Block Grant in the amount of $6,000, which was later received. This was the start to the planning and design of the Early Childhood Development Center. The ground breaking began in the spring of 2007, with the completion of the center in May 2008. June 2 of 2008 marked the opening of the new center.”