Each year the Wellness Committee at Howard-Winneshiek Community School District tries to sponsor a Fall Fitness Day for students and staff. The idea is to get kids outside and moving for a minimum of 30 minutes during the course of the designated school day.

As the committee began looking at potential dates to host the event this year they agreed that a Friday would work best, preferably one that coincided with a home football game. “We picked September 11th,” said Shelly McAllister, committee member and physical education teacher. “In conjunction, we realized we could recognize 9/11.”

Activities for high school students Friday afternoon included the option to play a variety of outdoor games, including: flag football, Frisbee, beanbag toss, giant Jenga, and kickball, and students had the opportunity to climb a rock wall, courtesy of Sergeant James Johnson and the Iowa National Guard. Students also enjoyed a volleyball tournament inside the school later that afternoon. Most exceeded the 30-minute minimum of physical activity that day. 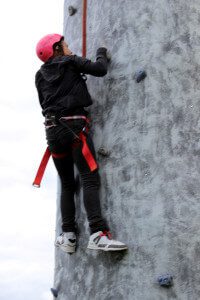 Students additionally got to listen to music via Karaoke/DJ Joe, and they were offered watermelon and water.

“We apply for a grant called ‘Fuel Up to Play 60’ to help pay for Fall Fitness Day,” said Nutrition Director Cheryl Dickman, adding that this year the committee wanted to do something different to kick-off the afternoon activities for kids. Prior to heading outdoors that day, all students filled the Crestwood High School gymnasium to hear about the history of 9/11. Students clutched small American Flags at the assembly.

Fourteen years have now passed since the 9/11 terrorist attacks on America. As one educator stepped outside for Fall Fitness Day, she talked about the tragic events and noted the importance of discussing the historical day with students.

The educator compares the sentiment to her own youth, when she had not known much about the December 7th, 1941 attack on Pearl Harbor other than what she learned at school and through history lessons. “We visited Pearl Harbor a few years ago, and it was so much more dramatic and I understood it so much more because we went through 9/11,” she said. “I truly believe that it’s true, if you don’t study history – if you don’t know it – it is going to be repeated. I just think kids have to know that.”

Some kids went straight to the rock wall on Friday afternoon, where Private First Class Andrew Kasuboski and Specialist Taylor Boos could be seen assisting them, alongside Sergeant Johnson.

Boos was 6 years old when 9/11 occurred. She was in kindergarten, and remembers seeing the events unfold on television and being confused, but understanding that something was definitely wrong.

“It’s always kind of surprising that it takes such a traumatic event to bring people together, but I’m glad it did because there are a lot of people who lost loved ones and family members. You’ve also got the police officers and firefighters who jumped in that day, too,” she said, “I don’t think they get as much recognition as they should because they took on the most responsibility. That’s half my motivation for joining the Army because the next time that happens – I want to be there.”

Kasuboski was 5 years old. “I remember 9/11 very clearly,” he said. “I was sitting on my couch waiting to go to school. My mom and I were watching the TV. Just the amount of support that came from that event has always made me want to enlist. I love being in the Army and it shouldn’t be just for one event that we all come together like this. It should be every day. It’s a day that stands out, and I’m glad I got the chance to put on this uniform and wear it the way I do.”

Before Kasuboski graduated from high school last year at New Hampton, he remembers one educator asking his class whether or not they should stop talking about 9/11 as a subject. “We said, ‘No. You need to leave it in [the curriculum],” he recalled. “He was surprised because he didn’t think we’d remember it from so long ago, but we remember it clearly.”