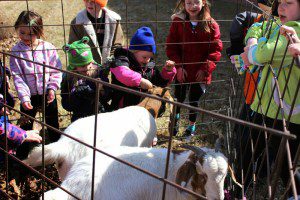 Students at Howard-Winneshiek Community School District had the opportunity to see two real-life goats on Friday, March 20, courtesy of Todd Knobloch, in charge of the Gifted and Talented (GAT) program at the elementary school.

Recently, during library time, students read the story “The Billy Goats Gruff.” Meanwhile, some of the older kids have even practiced constructing different types of bridge designs in class to coincide with the storyline. Then, on Wednesday, March 18, the Des Moines Metro Opera’s Iowa Tour Troupe also visited Howard-Winn to present their operatic version of the classic children’s story.

Knobloch said he decided to bring in a couple of his own real-life goats so the kids could actually see what they look like. “When the kids first started [reading] ‘The Billy Goats Gruff’ some of them had never even heard of the story before,” he said, noting that this is the goats’ first adventure away from the farm.

That said, the two goats that Knobloch brought to school for the kids to see had actually begun their lives as bottle-fed goats. “They’re pretty friendly,” he said. “They don’t mind being around people.”

The kids asked plenty of questions about the goats on Friday. “They were fascinated with the horns,” said Knobloch, “and they wondered if the goats eat leaves. It’s a neat experience for them, because a lot of the kids have never seen them before.”