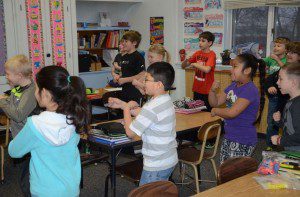 Even though it’s been a couple of years since she had her own classroom, St. Joseph Community School Principal Christina Carlton knows the look by heart.

She’s seen those eyes glaze over. She’s seen the body language that says a student has checked out.
And so, too, have her teachers, but these days, they’re seeing that look much less because St. Joe’s is all about “brain breaks.”

“Research tells us that kids need a break after 20, 25 minutes,” Carlton said. “They don’t need an hour of play or anything like that, but they need a quick break.”

Walk into a classroom at the right time, and you might see students walking like ducks, stretching like foxes or even making some pretty strange noises.

In short, they’re giving their brains a break.

“Sometimes you just got so much going through your grain, you just need a little break,” said Caitlyn Rochford, a student in Susie Klunder’s fifth- and sixth-grade classroom.  “It’s like, ‘Wow, I need a minute.’”

Her classmate, Sophie Phillips, agreed.  “When we do them, I fell like so much better about learning,” she said. “Brain breaks are fun and they kind of make you feel refreshed and better.”

Dawn Heying teaches third- and fourth-graders at St. Joe’s, and she is a big believer in the brain breaks.  Part of the reason is that she has more and more students who don’t get enough sleep at night.

“I’ve read that 30 percent of student on average don’t get enough sleep,” she said, “and that make the brain breaks even more important.  People might say we’re goofing off, but that couldn’t be further from the truth.  It actually facilitates the learning process.”

Like many St. Joe’s teachers, Heying often allows her students to choose their brain break activities.  The brain breaks last no more than two or three minutes, and teachers have become accustomed to interrupting a lesson to conduct a brain break.

“Oh, I’m definitely with Christina when it comes to knowing when the kids are checking out,” Herold said.  “What’s been amazing is to see how much better focused they are even after a minute or two with a brain break.”

The key and some would think the challenge is getting students to realize that the break is quick.

Caleb Mason, a student in Klunder’s classroom, laughed when I asked about what happens when a brain break has concluded? “You go back to work or else we don’t get to do them,” he said.

But students are OK with that.  If they didn’t know they needed brain breaks before, they certainly do now.

“Sometimes, I think something’s really hard,” said Natalie Marr, another student in Klunder’s classroom, “and then we do a break and it’s like this is easy.”

And when they get back to work in Heying’s classroom, they do so on some fairly unique chairs – exercise balls the school received thanks to a grant.

“It keeps the blood flowing and that’s good,” Heying said. “As a teacher, it’s a little different to see the kids bobbing up and down, but I’ve found they do focus better.”

Check out the FFI Brain Break playlist on YouTube