Natasha Hegmann has found a happy balance with where the farmers market fits in her direct-marketing plan. As an introvert, she values the solitary time she spends working at Turkey River Farm, the diversified produce, hog and agroforestry farm she runs with her husband, Pete Kerns, near Elkport.

But as a beginning farmer passionate about serving her rural community, she also loves the weekly opportunity to meet and interact with her customers at the Guttenberg Farmers Market, about 18 miles away.

“I love it because it’s a small-town farmers market on the banks of the Mississippi River in a grassy park,” Natasha says. “And at this park, we know the names of most of our customers, and they have come to know us well, even though we’ve only been farming four years.”

For Natasha and Pete, community outreach is central to their farm’s mission, and their vision of sustaining people in their rural county with healthy food. It also deeply influences their marketing strategy, which has been built on starting small, marketing locally and emphasizing community relationships. 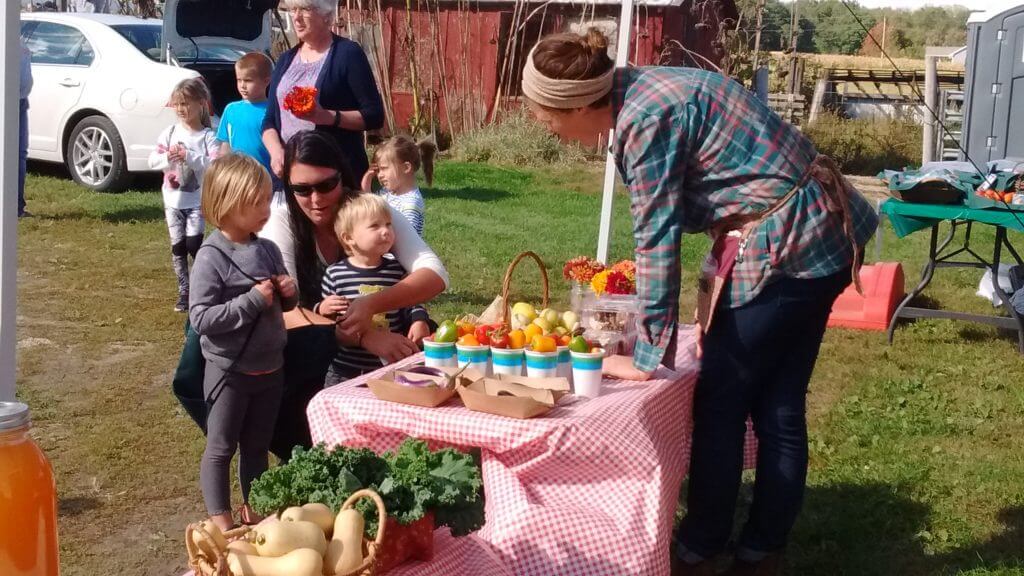 Natasha talks to a preschool customer at her market stand.

Natasha and Pete farm on 5 acres they rent from the Communia Corporation, an Iowa-based non-profit that runs the Deep Mountain Retreat Center on 280 acres near Elkport, where they also serve as caretakers for the retreat, managing the guest house and maintaining trails and woods on the property. In addition to the farmers market, the couple operates a 40-member CSA that offers some unique options. A farmers market share lets subscribers select items they want from the weekly Guttenberg Farmers Market.

The regular CSA share offers home delivery throughout the county or pickup at the farm. Natasha and Pete also offer a fall CSA share and a donation share option, where people can pay for a full CSA share that goes to the food bank each week. This season, they started a fund people can contribute to that subsidizes CSA shares for public education and healthcare employees.

“Pete and I both have a background in farm-to-school,” Natasha says. “My mom works in healthcare, and Pete and I are very passionate about rural healthcare access. So this is the direction we pivoted to a little bit this year. We’re excited about getting fresh food to our community in different ways.”

Natasha and Pete have also built direct markets around their other enterprises, which include pastured pigs, maple syrup and oyster and shiitake mushrooms – and their community outreach feeds into and reinforces these marketing efforts. They rotationally graze about 30 heritage-breed feeder-to-finish pigs – a mix of Idaho Pasture Pigs, Tamworth-Berkshire and Hereford – which they market as whole and half hogs or 35-pound sampler packs.

They sell their maple syrup, about 20-25 gallons a season, primarily to farmers market customers, though CSA members can add it onto their shares. Mushrooms are marketed in a similar manner. The couple also donates food to the local food bank; volunteers at the Central Community School garden; and invites the public to their farm for a range of educational events, from field days and school field trips to weekend maple syrup retreats that give participants hands-on experience with syrup production.

This spring, Natasha and Pete embarked on a new endeavor: a cooking class collaboration with the owner of By the Spoonful, a specialty grocery store in McGregor. The first class was called “Eat Like a Veggie Farmer,” and focused on meal planning and some simple and inexpensive ways people can incorporate more fresh vegetables into their diets.

In a version of the program tailored to local gyms, called “Squats and Squash,” Natasha and Pete share information about their CSA, farmers market options and adding fresh foods into their whole-body plan.

This community-focused approach has proved successful so far. In just four years, they’ve expanded their CSA from 11 to 40 customers, increased production to 5 acres from their initial one-eighth acre and forged close ties with their community while fulfilling their values. But Natasha admits they had to recalibrate some of their initial expectations – notably, how vital farmers markets would prove to be in establishing community ties.

“We were preparing to start this farm, do direct marketing and move to a place where we didn’t know anybody,” Natasha says. “Farmers markets ended up being huge for building relationships in Elkport.”

Natasha and Pete met in Montana while serving in FoodCorps. They knew early on that they wanted to start a farm together focused on their mutual interest in food and social justice – and the Midwest made sense. Natasha grew up in Iowa, while Pete, originally from the Chicago area, had potential access to family land in southern Illinois.

The couple started exploring land access options while still in Montana. They looked at farms in Wisconsin and considered Pete’s family land in Illinois. Ultimately, the opportunity to rent land from the Communia Corporation led them to choose Iowa. “We did not do a thorough investigation of the market for vegetables and pork in Clayton County before we moved here,” Natasha explains.

“Choosing Iowa was just the path of least resistance to land access – and was a place where we felt supported, and felt we could build markets.”

In 2015, still in Montana, they formally incorporated Turkey River Farm LLC in Iowa and began planning their farm in earnest. During that summer, Natasha was working for a farmer friend, Marguerite Jodry, near Bridger, Montana. Marguerite raised vegetables, and was “a big farmers market farm,” Natasha says, selling at three markets a week. In between helping on the farm and staffing the intense weekly schedule of farmers markets, Natasha worked on the details of Turkey River Farm’s vegetable production and CSA – both of which she manages, while Pete manages the hog enterprise. 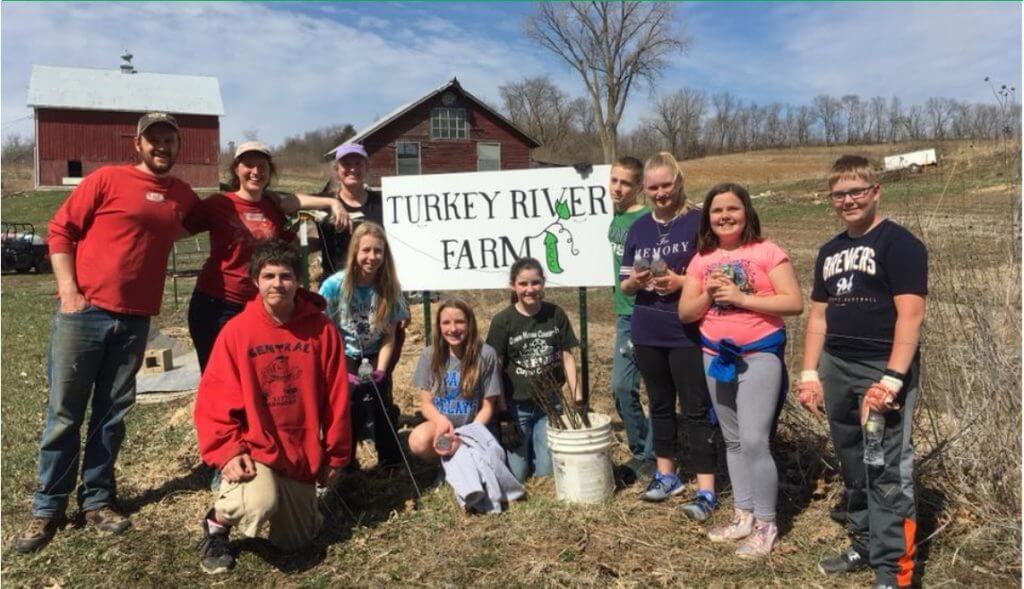 Pete and Natasha host students from Central Schools at their farm.

Natasha knew she wanted to focus mainly on a CSA. She had worked for PFI member Laura Krouse, of Abbe Hills Farm near Mount Vernon, for five growing seasons and loved the varied nature of the work, and that customer relationships are so central. But working at Marguerite’s farm had left her feeling weary of the hustle and emotional energy needed for selling at farmers markets.

Knowing they lacked local connections in Clayton County, Natasha and Pete had already planned to market their CSA the first season to a small group of customers in Iowa City, where Natasha’s mother and grandmother live and where she’d graduated high school and still had several contacts. She’d built farmers markets into her business plan – but only expected to attend a few markets their first season.

“I think in our business plan I wrote that we’ll go to three farmers markets total in the first year, because I didn’t anticipate having much more extra produce than that,” Natasha says. “But we ended up going to every Saturday farmers market and trying out a Friday farmers market as well. We attended markets in Marquette, Guttenberg, Elkader and Edgewood. Going to those markets was really critical to building relationships and laying the foundation to moving our CSA here.”

Their second season, Natasha and Pete had cultivated some CSA customers locally and were able to scale back their Iowa City presence. By their third season, in 2018, they had filled their now-expanded CSA slots with local county customers and were able to eliminate the Iowa City location.

For Natasha, seeing the unexpected role farmers markets would play in their fledgling CSA underscored a key lesson: establishing trust takes time. Being mindful of this is valuable for any relationship in life, Natasha says, but she notes it’s especially important for beginning farmers to bear in mind.

“It’s really important to have patience with relationships, if direct-marketing is what you’re trying to do,” Natasha says. “It takes people time to become comfortable with new people, ideas and products – and it takes multiple exposures. That’s one thing I learned in FoodCorps about kids. They need to see a new food or vegetable several times before they become comfortable with it.

“With vegetables and a CSA, you’re asking a customer to put a lot of trust in you – and money in your operation. You’re asking them to make a commitment, and also deal with weird vegetables sometimes. That’s kind of a big ask, and we really had to establish trust with customers that we knew what we were doing and could bring a consistent supply of beautiful, fresh vegetables to market every week.”

Since getting their CSA established in Clayton County and growing their customer base to a comfortable level, Natasha and Pete decided to scale back their farmers market presence to just the one weekly event in Guttenberg.

But both agree it still plays an important role in their direct-marketing efforts – and as part of their broader commitment to having a strong community presence. “The farmers market, the CSA drops and pickups and the other things we do – they’re by no means the bulk of our work, so they balance naturally,” Natasha says.

“Even though I’m an introvert, since 90 percent of worktime is alone or us together, I have enough social energy built up for my customers. It’s also very rewarding to feel the farm come alive with people and kids when we do special events. Looking back now, thinking about how we didn’t have any community connections at all and how it’s not been that long, I now feel incredibly grounded in this community.”