The Taste of Fayette County event on Wednesday, Sept. 26, celebrated eating healthfully through local farm produce at Kahler’s Pumpkin Patch in Elgin. Children under the age of 5 were the focus, since it is an early childhood initiative, but all families were welcome. Vicki Starks, the Early Childhood Education associate for Fayette County Food and Fitness, visited local preschools and daycares to give the children magnets to take home explaining the event. 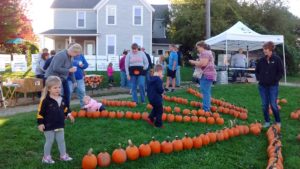 “Since October 2016, our Fayette County Food and Fitness associate has been in the preschool and daycare classrooms in Fayette County, teaching the children and teachers about local food and the benefits of trying new foods,” explained Haleisa Johnson, Northeast Iowa Food and Fitness Early Childhood program coordinator. “This school year, the associate will be doing hands-on interaction, experiential learning with parents, so we can encourage healthy behavior changes at home, not just within the classrooms.”

Without the funding from the Robert and Ruth Walker Charitable Foundation, the program and the Taste of Fayette County would not have been able to move forward. Because of their success in the classrooms, Susan DaCorte, a niece of Robert and Ruth Walker, thought having an interactive event would be fun.

“We’ve always wanted to celebrate the agriculture heritage,” Johnson said. “We want everyone to know they can celebrate without cake or cookies.”

The Food Hub and the Local Foods Program at Iowa State University Extension and Outreach partnered to create a farmers’ market for the children. Turkey River Farm and Nature Haven Farms were the two local farms selling their fresh food. The kids 5 years old and under received three $1 coupons to buy produce and a drawstring bag to put what they bought in it.

“I contacted the two farmers that were there, and we brainstormed ideas of which foods would be a dollar, so it would be easier for them to make those transactions,” said Teresa Wiemerslage, field specialist for the Local Foods Program at ISU Extension and Outreach. “It was a kids-only farmers’ market, so they [the children] could pick what they wanted.” 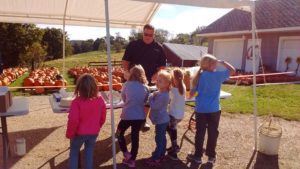 ingredients to make burritos with the children. His interactive booth was very popular, since he let the children press their own tortillas. Their faces were in awe when Chef Elliott would toss the pressed tortilla into the air like pizza dough. Choosing from a variety of colorful food, they would each choose what to put in their burrito. For dessert, there was a separate tent for yogurt made by Country View Dairy.

The children were also given a coupon for a free small pumpkin if they were 5 years old or younger. The Kahler family had the pumpkins aligned in a star, making it easier for the children to choose their favorite ones. Also, larger pumpkins were for sale, and for the first time, Full Moon pumpkins, which are the white-colored ones, were available.
“It was an early-childhood event, so the pumpkins were a big draw because it’s something they can pick up and take with them,” Johnson said.

In addition to the pumpkins, the Kahler family let the children try their hand at spin art. A piece of white paper would be put into a wooden bin, and the child would squirt paint on it. The paper would be transferred to another bin to spin, making the paint spread across the paper in colorful designs.

Waiting for their spin art to dry, the children could pet and feed animals. The North Fayette Valley’s FFA students brought their own farm animals for a petting zoo.
The Kahlers’ children were in FFA and were behind the idea of starting a pumpkin patch.

“Our oldest two [Heather and Justin] started the idea to sell the pumpkins for an FFA project, and then Amber and Tatum did it, too,” said Deb Kahler. “We started with a little trailer out in the front yard.”

Now, the Kahlers have pallets and pallets full of pumpkins of different sizes ready to find a home.

“When we have tours come, that’s our main focus,” Deb shared. “We work strictly on an honor system, and we’re open any time you can see. You can take pumpkins you want and put the money in the box.”

During the third week of October, they are expecting about 360 students to visit the pumpkin patch and listen to Karen Bonte, a retired West Union preschool teacher, read a story, let the children play with pumpkins, and have them go on a hay ride to pick out their own pumpkins to take home. Deb will have pumpkin cookies ready for the youngsters to eat.

The Taste of Fayette County event was deemed a success and could possibly be held again in the future. Children left with their tummies full of healthful food, pumpkins in hand and smiles on their faces.