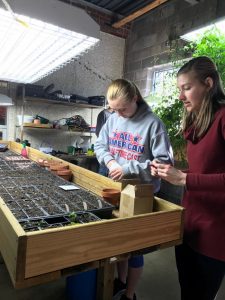 Thanks to a growing interest in gardening and the availability of a greenhouse, Central students have been able to stock the school salad bar with leaf lettuce and cherry tomatoes during the winter months.

According to Central science instructor Ann Gritzner, growing fresh produce was designed as a way to utilize the fertilizer produced by the school’s vermiculture project. That project, which was launched last year, uses worms to increase the efficiency of the school’s composting effort. Central students have been composting school lunch waste for about three years.

“The students tested the effects on plants and found that ‘worm juice’ greatly increases production,” Gritzner said. She added that starter plants for the school garden, plants for various science experiments, and plants like prairie grass and lavender are also grown in the greenhouse’s nutrient-rich soil.

The Central greenhouse is located on the second floor of the school building just off the biology classroom. It measures 10×18-feet and includes four grow lights that were purchased when the space was remodeled. The current school renovation project doesn’t include updates to the greenhouse, though Gritzner said the space leading into it would be greatly improved thus making the greenhouse more functional.

Gritzner’s students have responded favorably to project-based instruction that utilizes the greenhouse.

“It’s great to have the space and materials so students can investigate their ideas right here in the classroom,” she added. “With the formation of the school garden and school garden club the greenhouse is a great and inexpensive way to maintain a garden while educating students about how things grow.” It also helps students run controlled experiments. Within the confines of the greenhouse, they can carefully monitor the amount of water, type of soil, and hours of light each plant receives.

While older students are the primary users of the greenhouse, they aren’t the only ones who learn from it. Second and third graders have made garden plans that will be used to determine what will go into the school plot later this spring. Some of the plants in their plans will be started in the greenhouse.

“Involvement (with the greenhouse) also helps students have ownership of the garden and hopefully that will encourage them to continue volunteering over the summer and making use of the produce,” Gritzner added.

Gritzner’s students are currently researching a way to capture rainwater run-off from the school’s roof to use for watering the plants in the greenhouse.

“The best thing that students can learn from using the greenhouse is a love of growing things and the ease with which it can be done,” Gritzner concluded. “The more interest we can cultivate in gardening the more likely children are to one day have a garden of their own. Gardening can teach everyone about land stewardship, locally grown foods, nutrition and lifecycles, and can also be a lifelong healthy activity. Of course, students also learn how to run controlled experiments and many other things about plants along the way.”