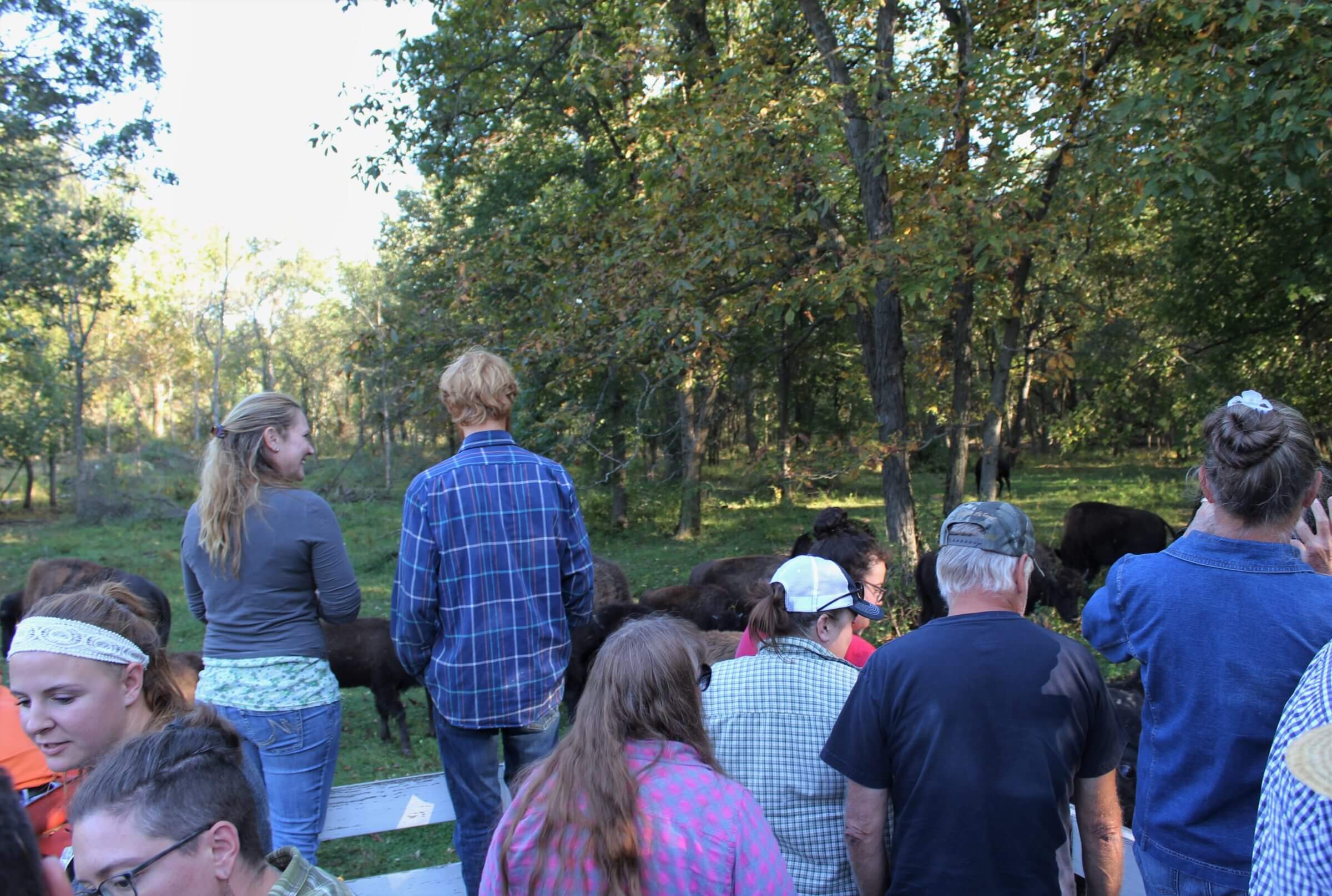 Martha McFarland explains animal handling to Steffen Mirsky, as group members get an up-close and personal look at the bison.

20 farmers from around the region gathered at Hawkeye Buffalo Ranch for the Northeast Iowa Food and Farm Network (NIFF) gathering on Sunday, September 17.   The cool, sunny fall day provided a perfect backdrop to tour the ranch, learn about their agri-tourism model, and get up close to the powerful, majestic American bison.

The gathering started with introductions from those in attendance, who represented diverse enterprises and from as far away as Edgewood and Dorchester. Then, Martha McFarland, who operates Hawkeye Buffalo Ranch with her father Dan, shared their story and described their ranch operations.

While the McFarlands have some crop and timber land as well as a small polled Hereford herd, the bison are the centerpiece of their operation. Not only does the herd produce delicious (and sought after) meat and breeding stock, but it also provides a point of interest for agri-tourism. McFarlands hosts guests over the summer, providing historical information about bison, the prairie, and the changing landscape- including the history of their own homesteading family. This group of farmers was ready to see how those tours work.

Martha started the group off in the shop where they sell meat and art made with bison products, and where they also house artifacts to help teach people about bison and the people who thrived on the prairie. Included in their collection is a skull of an ancient ancestor to modern-day bison- the Bison antiquus– which would have lived on the Great Plains 40,000 years ago. Martha shared that the bison population is estimated to have been between 30 and 75 million before European settlement, but by the early 1900’s, there were fewer than 1,000 left. Today, there are around 500,000 bison in North America.

After seeing the artifacts and learning more about the history of such an amazing animal, the group was eager to see them firsthand. Everyone piled into the wagon that McFarlands use for tours (which has comfortable bench seats and provides a good view of the landscape) and the story continued. This group of farmers likely had different questions than the average guest, as they quizzed Martha and Dan about fencing, handling, age to sexual maturity, slaughter, calving, and behavior. 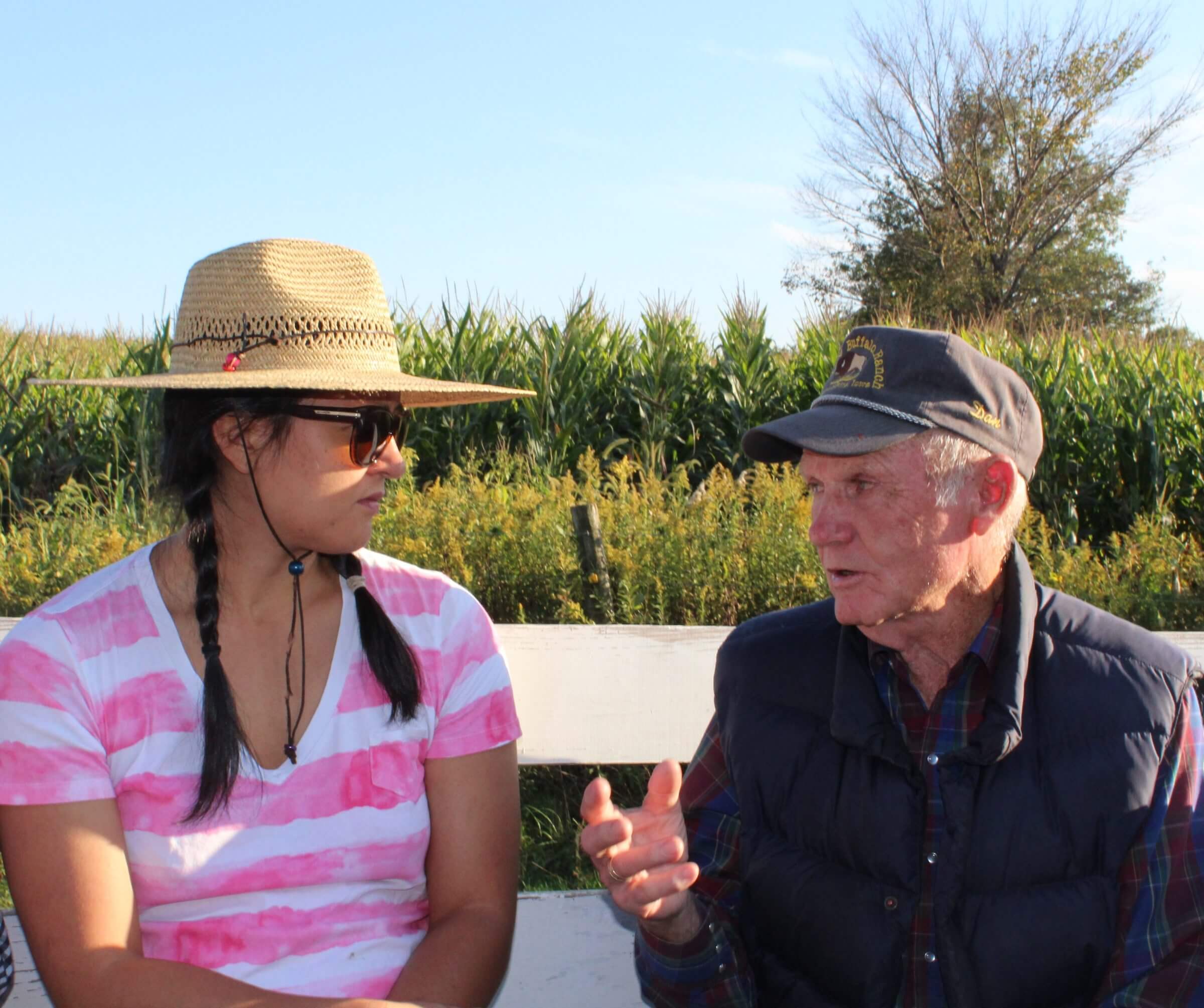 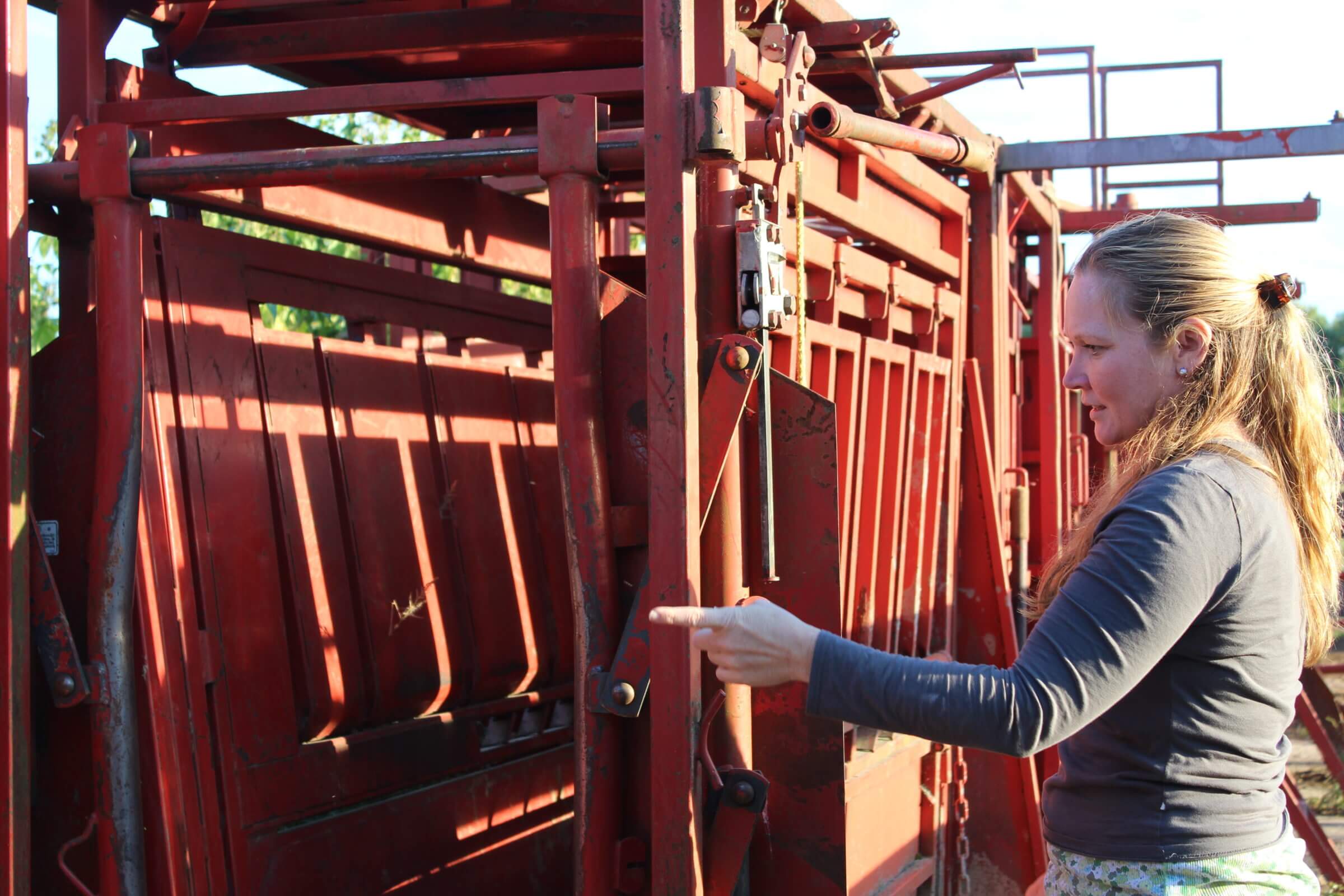 Martha McFarland shows the group the working facilities and headgate used for the bison.

Then the magical moment arrived; the wagon pulled into a stand of trees and the entire herd of bison started to appear, seemingly out of thin air, and approach the tractor and wagon. While Martha explained that they are often frightened by strange objects or events, they are used to the routine of the tours, and excited by the prospect of ear corn and treats that come with visitors. Giant bulls and cows approached the wagon, and the group was able to hand-feed them ear corn. The bison even licked people’s hands! Seasoned livestock farmers squealed in delight and disbelief to get up close and personal with these massive, majestic, and once nearly extinct giants of the prairie. 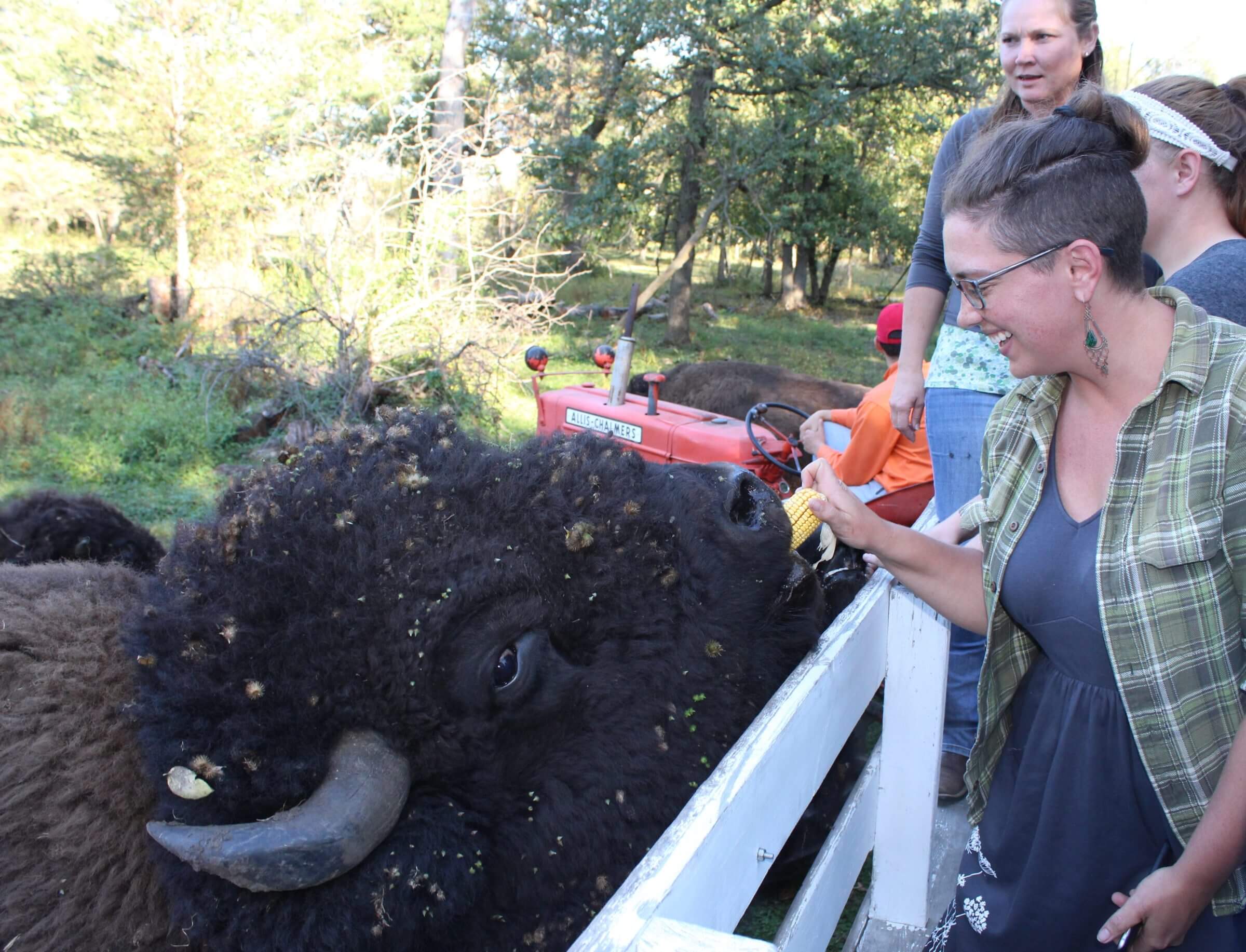 This truly amazing experience led to many conversations on the way back to the farmstead, including comparisons for different systems of raising livestock. Once back, the crowd was ready for a hearty potluck, complete with bison jerky and bison summer sausage, and the group continued to network until the sun went down.

The Northeast Iowa Food and Farm gatherings always help people make connections and find ways to support each other. In this case, this group might prove to be future customers! Fellow farmers were so struck by this unique experience that they will likely make return visits to Hawkeye Buffalo Ranch, with friends, family, and out-of-town-guests in tow, to experience a whole lot of history and a rare opportunity to interact with bison.

If you’re a local food or niche farmer (whether aspiring, beginning, transitioning, or established) who wants to make connections, find common interests, collaborate, and learn with peers, NIFF’s next gathering will be 4:00 p.m. Sunday, October 15 at Humble Hands Harvest near Decorah. Contact Kayla Koether (koether@iastate.edu or 563-382-2949) for more information.

If you’d like to visit Hawkeye Buffalo Ranch to see the bison or try some buffalo meat, learn more and find their contact on their website www.hawkeyebuffalo.com or check out their facebook page: www.facebook.com/hawkeyebuffaloranch.