They might make a face or scrunch up their nose

They may refuse to even try a small bite

If you give a child a fruit or vegetable….

They may love it!

But at least they are being exposed to fresh fruits and vegetables they may never have considered trying before once someone gave them the opportunity.

Since starting my AmeriCorps service with the New Hampton School District, I have done taste tests in the cafeteria and in the classrooms. I have come across many picky eaters who have said they did not like peppers, cucumbers, cantaloupe, or even cheese curds. Every time I ask them, “Have you ever tried it before?” Most say “No”.

I have even come across some adults who say to me, “You’re going to give them kale chips?? They won’t eat those”. I believe that kids are at an impressionable time in their lives, especially kids 8 and under when they are really listening to everything you say to them. If we assume kids won’t try new things, they are going to have the attitude where they refuse to try anything unfamiliar to them.

I believe you can get kids to try just about anything if you have the right presentation. When I go into classrooms, we all try the fruit or vegetable together. We are all active participants. We rate the item with our thumbs, and sometimes they get stickers that say “I tried it”. Then I see the kids who did not want to try are suddenly very interested in what’s going on and they do eventually try it. Some ask for more, and some may not like it even after they tried it, but that’s okay because at least they tried something new.

Because if you give a child a fruit or vegetable… they might just ask you for more! 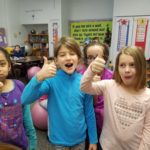 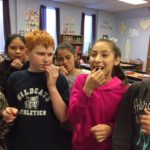 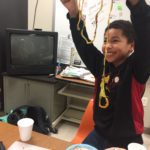