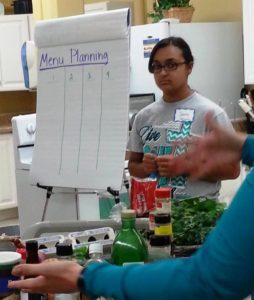 Sierra Gonzalez, has been the FEEST intern at Postville High School for two years. Among her requirements are providing information for a newspaper article, as well as, having six FEEST events throughout the school year. Gonzalez also had to complete and intern project.

She explained, “This year as my project, I was to create a recipe booklet containing all the recipes for each item made at FEEST.”

As FEEST participation has continued to grow, the Postville group has numbered about 16 members at the events.

As the meals were prepared, Gonzalez said, “It was our goal to demonstrate to the youth that it isn’t difficult to make a healthy meal from food sold locally at home. It is also a way to give the younger kids the opportunity to try new foods they wouldn’t normally have the opportunity to try in another setting. More than likely, these are foods they have not eaten before either.”

She added, “We used lots of foods as our goal was include all food groups in each meal. In one particular meal we used the following foods from different food groups: vegetable, pepper; grain, quinoa; fruit, kiwi; protein, meat or eggs and dairy, cheese.”

Sierra and FEEST coordinator Cici Mueller also brainstormed multiple uses for an item before purchasing it. She explained, “While doing this we were trying to enhance the creativity of the students. We have also shared with staff members at school.”

As a fundraiser, a group consisting of youth and adults prepared a lunch for the staff. Each teacher paid $6 for the meal which was made of soup, salad and breadsticks. It is reported that the meal was well-received.

When reflection on the year’s activities, Gonzalez said, “This has been a rewarding year. It is very rewarding when I see youth who participate discover they like something they have never tried before, and seeing the aftermath of their experience. For example, kids it is great seeing kids becoming healthier in their choice of foods or having them come to the next FEEST and talking about something they had made at home.”

As a reflection, Sierra noted that year’s activities have goon very well. She said, “I would like to that the adults who came and assisted me: Becky Rea, Elin, Laura Liechty, Mary Koopman and Cici Mueller. As special thanks to Cici because I know none of the FEEST of events would not have been nearly as successful without her help. I am very grateful I was able to intern under her for the past two years.”