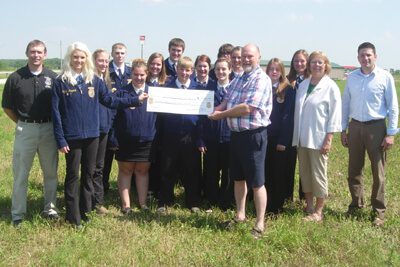 Members of Crestwood FFA purchased the remaining 20 shares of stock in Lime Springs Beef LLC on July 3. They will now get hands-on experience in owning a business. FFA President Kaytlan Langreck presents a check to LS Beef President Jesse Stevens.

“This is a great opportunity for Crestwood FFA. We’re trying to get education to be real instead of all textbook. It doesn’t get much more real than this,” said advisor Mike Adams. July 3, the FFA made Iowa history by purchasing 20 shares of Lime Springs Beef, LLC stock.

A large group of supporters was at the building site, just south of Lime Springs Travel Plaza, to witness FFA members purchase the last shares of stock from President Jesse Stevens.

Stevens said, “On behalf of Lime Springs Beef, I really appreciate what the kids have brought, and I look forward to their input.”

The chapter is now intricately linked to the business, which is scheduled for ground-breaking later this month. The students can learn about starting a new business, construction, finances, marketing and the ups and downs of running a business.

The basic concept of the enterprise is to supply beef to consumers which will have the farm name on the label. The public will know the farm the beef was raised on, and how it was fed as it grew. Each farm will be featured on the website.

“Investing this $20,000 is a sound investment,” Adams noted. “We found there is a need for this kind of product. People want to know where their meat is coming from. There is accountability and trust. This will be a successful venture.” He did admit the students would learn from the experience either way—just like in real life.

The first rumblings about the new business were heard in early 2012. President Stevens contacted FFA as a potential investor. Adams presented it to the chapter, which gave him the go-ahead to pursue the proposal.

He talked to, and got approval from, the advisory committee, Booster Club, former advisor Glen Dillon, former members and the school board. “Then the FFA Chapter voted. It was overwhelmingly in support. Ninety-five percent approval.”

That was the easy part. It turned out, the law was unclear on how to move forward so the code had to be clarified.

Supt. John Carver addressed the crowd by saying, “A year ago, our kids couldn’t have done this, but Representative Josh Byrnes introduced legislation to make this possible.”

Byrnes drafted the clarification to the former House File 227, which was approved unanimously by House and Senate. It was passed by the House on March 19, 2013, with a vote of 96-0.

Gov. Terry Branstad signed House File 533 into law at the Howard County Business & Tourism annual meeting on April 25, 2013. In this instance, the law provides for entrepreneurial education funds from student organizations and clubs (Crestwood FFA) to be invested in entrepreneurial enterprises (Lime Springs Beef, LLC), which will help students develop and practice entrepreneurial skills and foster a business-ready workforce.

Byrnes commented, “This is the first bill that I drafted that turned into law! This is a good project. [Howard-Winneshiek School District] is the first school in the state of Iowa to take advantage of this. It’ll be fun to watch [how it turns out].” He was excited about all the phases of the operation the kids would be able to help with. One small part would be technology. “With the entire school having 1:1 [computers], kids could write software for app programs.”

FFA member Kate Grover, junior, is one of the lucky ones who will be able to say, “I was there from the beginning.” Others will learn from what the next FFA class will experience first-hand. She said, “It will be a great opportunity to be a part of this new business venture. It’s a great opportunity for jobs.” The facility is expected to employ 50 individuals when it opens.

Wilhelm stated, “I’m proud of our area—especially the school board and FFA Chapter. It will give them an opportunity. They won’t learn that in the classroom. I applaud the courage of the small community for thinking out of the box.”

Changing the rules.  Students wanted to use some of the $90,000 saved in CDs to invest in the start-up.   Initially the FFA chapter was unable to take advantage of the opportunity. Although the principal and superintendent approved the investment, the Assistant Director at the state auditor’s office said the investment would break a state statute by investing taxpayer money in a private enterprise.  State legislators assisted the group in introducing the Entrepreneurial Education Funds for Student Organizations and Clubs Act. The law allows school groups to create an entrepreneurial account to invest in private enterprise.