This week in Riceville and Waukon elementary schools I taught students about sugar. I started out with a presentation about how our bodies are engines and what we put in them determines how we feel and act.  I had the students talk about what they had for breakfast and how they feel during the day before lunch and had them decide if their breakfast was healthy or not. Most students who ate a sugary breakfast, knew that it was unhealthy and admitted to feeling hungry during the morning.  Then I had the students guess accurate portion sizes for all of the food groups and I showed pictures of what a serving of each actually looked like. The main part of the lesson, however, included talking about sugar and the effects it has on us.  When I asked the students what sugar was to them the conversation went a little like this:

Student 3: “Yeah, I was going to say addicting”

Student 5: “God’s gift to Earth” … (laughter from the class)

I knew that the lesson was an important one after receiving the answers that I did. I broke the students up into groups and handed out cubes of sugar to each group.  I had 17 food/drink items on display at the front of the room including Coke, Mountain Dew, Rice Krispie, carrots, and a slice of bread.  In their groups, the students had to guess using their sugar cubes how many were in each item.  Before I revealed the answers I held up 17 sugar cubes and asked if anyone would actually sit down and eat all of the cubes in one sitting. A few students replied yes to get laughs from the class, but most said no, that it looked “gross”.  I revealed that there are roughly 17 sugar cubes in a bottle of Coke and asked them how many have ever had an entire bottle of Coke in one sitting. Most held up their hands. You could see that their minds were turning and one student said that they have never looked at it that way before.  I encouraged them to look at the sugar content of snacks in the future and to think about how many cubes they are sitting down to eat. 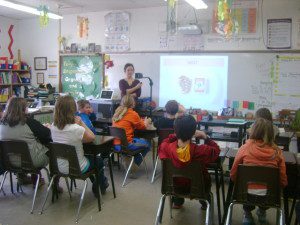 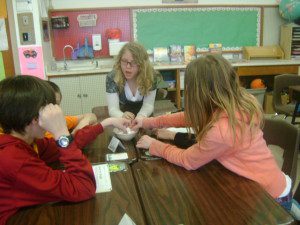 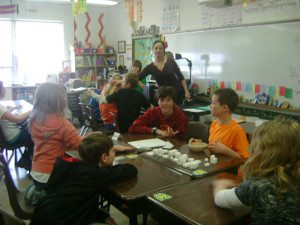 Students guessing how much sugar is in each item 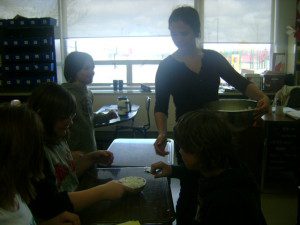