On Thursday, October 18, youth wellness champions and their adult coaches from sixteen area schools attended the first of four 2012-2013 Food & Fitness Regional Youth Leadership Team Meetings. The meeting was held at the West Union United Methodist Church. It was a day jam-packed with activities centered around school food. 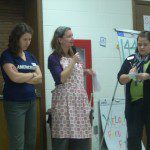 Before the day even started, the room was abuzz with networking and idea-sharing among members of different schools over a yummy breakfast of local yogurt parfaits. The morning began with a skit performed by several members of the FFI School Outreach team to weed through the truths and myths surrounding school lunch this year. A discussion on fostering cafeteria advocacy followed. 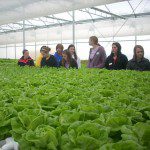 Participants then rotated through two groups of local food fun! The first activity was a tour of the Rolling Hills Greenhouse, owned by Eric and Fern Unruh a few miles outside of West Union. The Rolling Hills Greenhouse is near-acre sea of gorgeous salad greens and herbs. The tour was a great opportunity to connect with local producers and learn more about the ins-and-outs of farming in Northeast Iowa. 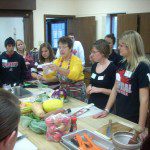 While not on tour at the greenhouse, participants used local produce to prepare a FEEST-style lunch for the group. FEEST, Food Empowerment Education and Sustainability Team, is a Seattle-based program that brings youth together to prepare a delicious, healthy meal while learning about the local food community. Students worked diligently under the guidance of CiCi Mueller, Postville FEEST coordinator. In only two hours, we had a bounty of roasted veggies, homemade applesauce, sweet potato fries, bruschetta, and much more! Adding this to salad greens donated from Rolling Hills, bread, chicken, and milk made for one delicious, nutritious lunch.

The day concluded with a series of “So What?” Spaces, breakout sessions focused on translating the knowledge gained at the gathering back to the school communities. Before adjourning, adult coaches were given a packet of information which included a mini-grant application to implement a FEEST or similar program centered around food education in schools.

A big thanks to all the attendees for making this such a successful gathering! Regional Youth Coordinator Lynette Houser received great feedback from the event. The FEEST in particular made an impression on several students, and many coaches commented this was the best youth meeting to date. The next Regional Leadership Team Meeting is scheduled for Tuesday, November 27th at the Calmar Dairy Center. I guess the bar has been set high!

One thought on “Regional Youth Gather for a FEEST”